Parenting: past performance is no indicator of future success

Oh this parenting lark is mad isn't it ? Just as you think you have your kids figured out and it seems that the waves are settling and you may well be in for a calm and smooth crossing... The lightning flashes, the thunder claps and a whole new type of bonkers begins. We've had the screaming abdabs, throwing things, pinching, biting, threats and tears. And that's just me and Hubbie !


We always have mixed feelings about school holidays. I used to look forward to spending days with my beloved boys, baking, lying in bed watching movies, going to the park, messing around in the garden. Then we had the long summer holiday last year and I changed my mind completely. Endless weeks of dealing with tantrums, tears, fighting, bad moods, refusal to take part in anything I'd book for them to do and generally just making me feel like a terrible person.

I don't plan now. I take each day as it comes and have a loose idea of what we will do and nothing too structured. This has had variable results this Easter holiday. The first week I was laid up ill so Hubbie had to do all the childcare during his week of annual leave. It meant the boys went to the park every day - sometimes twice a day - and mealtimes were a bit ad hoc. Then last week I sent them to a sports camp most days to wear them out and then my lovely mum called to ask if Big Boy wanted to go over and stay there for a couple of days. It was a lifesaver. Baby Boy loves having us to himself and Big Boy gets spoiled by grandparents and auntie and uncle. It's a win win - for the kids.

Then today after a particularly bad two days of meltdowns from Big Boy I asked my sister to talk to him. They are very close and have been since he was a baby, I thought if anyone could get him to open up it would be her. Afterwards I spoke to her about what's been happening and she hypothesised that he may well be feeling that while he's away Baby Boy is getting the better deal having Mummy and Daddy to himself for a few days. It had never occured to me that he might want to do that. I feel so stupid. Well, it's on my list to arrange for Baby Boy to spend some time with family so that we can have some exclusive Big Boy time.

So much still to learn. I'm so lucky to have a sister who can help me figure it out and he's very lucky he's got an aunt who loves him so much she is helping him and me to get this right. 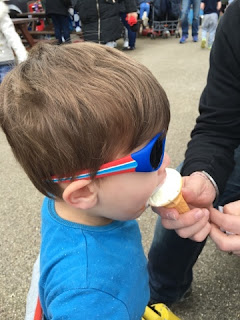 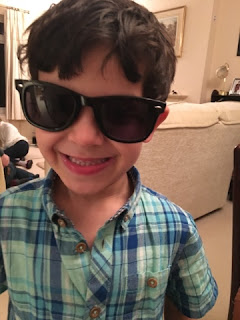 The future's so bright my boys have gotta wear shades.