Lessons I learned from my cat.

This evening I saw the cat lying on the sofa sleeping on a particularly fluffy blanket. He looked so relaxed and I had a few minutes to spare so I went over and rested my head softly on his body. I felt the warmth on the side of my face, the softness of his fur and the vibrations from his purring. It was a moment that I fully experienced and I don't often do that. 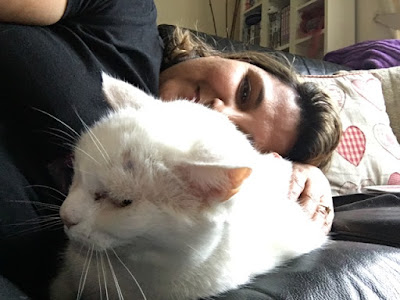 In the last few weeks I've been unwell. Firstly it was a bit of a cold and it was annoying, but not especially debilitating. Then it was a bit more full on and I was a bit flattened, but the boys got sick too so I parked it and took care of them instead. There's nothing guaranteed to make you get well faster than having to deal with children who are ill, grizzly and climbing into your bed at night because they don't want to be left alone.

So after a week or so of this it seemed we were all getting better. Then on the last week before school broke up for Easter I found I had tightness in my chest. Then the next day I felt really wiped out. Finally on the last day of school we all met up for an Easter egg hunt after school. We stood in the cold and drizzle waiting for the other kids, my boys were miserable and I was starting to realise that I wasn't quite well. Afterwards as we walked to the car park I banged my head on a low metal beam and the sound like an animal wailing in pain must have been heard for quite a distance. It wasn't a good sign.

On Good Friday I woke up ready to collapse. As we'd planned to visit my parents then Hubbie's we set off in the car. I went upstairs to lie down when we got to my Mum's house. I did the same when we got to the in-laws. Essentially I spent the entire Easter weekend sleeping. I couldn't stay awake for long and kept coughing too. It was pretty rubbish. During all of this I couldn't even enjoy any chocolate as I had given up for charity. As it was I couldn't eat much or taste anything so it was a moot point really.

It was so lucky that Hubbie was off work as I couldn't have handled the boys by myself. I stayed in bed and coughed a lot and slept a lot. Hubbie took the boys to the park, fed them and played with them. It's been the longest time I've rested since Big Boy was born. For the last year I've not stopped long enough to let myself get ill so this was a long time coming. The enforced rest gave me time to just give in to my body. I didn't swim for over a week. My fitbit recorded less activity than my cat achieves. In fact I took my cues from him and lay down and rested when and where I felt like it.

By last weekend I had completely lost my voice. The kids loved it as they could get away with so much knowing I couldn't say anything to them. Again I felt liberated. I didn't have to speak. I could just observe and listen. I noticed how much Baby Boy is chattering away to himself now. The mindless humming and singing that Big Boy indulges in all day became background noise and as he chunters away I realise that his Baby brother copies this and is finding his voice.

Like so many of us I don't take time to stop. I don't let myself take a break or let myself off the hook for daily chores or other things I tell myself I need to do. I'm not able to switch off easily. Giving in and accepting that I had to slow down gave me the chance to see how far my boys have come. It also allowed me to appreciate what I have in Hubbie who took care of everything while I collapsed in a heap of tiredness.

I've no doubt that things will return to normal before long. The school run, the swimming and daily fitness challenges on the fitbit. Scheduling decluttering time to get the house in order and meticulous meal planning. Just for now though I've enjoyed the slackness of it all. Taking my foot off the pedals is curiously satisfying. 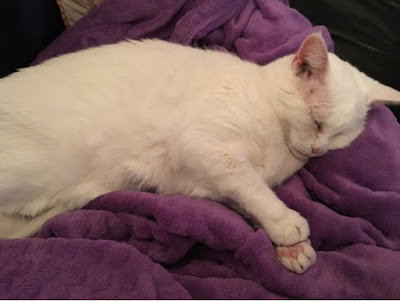