This isn't the blog post I was planning to write today. I'm not entirely prepared if I'm honest. All day it's been on my mind and now I'm here sitting at the keyboard and looking for the words.


As I stood at the sink this morning trying to persuade Baby Boy to prise open his mouth so I could brush his teeny tiny teeth Hubbie popped his head round the door.
"Have you heard the news about David Bowie ?"
"No."
"He's died."
"Are you sure ? Show me where you saw that."
He showed me the tweet. I went back to my son's teeth and turned on the radio to hear Nick Robinson talking about it. Yes it was true.
Big Boy heard the news items on the radio and asked me,
"Mummy are you sad about the man who died ?"
"Yes baby. It's a very sad day."

When we heard Golden Years on the radio on the school run I told him it was that man who died singing. Big Boy nodded along and smiled. I knew I had to make a radio show just for my boys so they would know who he was and how diverse and fantastic his musical legacy really is. On Friday night me and Hubbie will be on the radio presenting our tribute show - I always play a Bowie track on my own show and this one will be bitter sweet as I get to play all Bowie, but for the saddest of reasons.

Beckenham, Bromley and Brixton are all taking credit for Bowie. Tonight there is a street party in Brixton and every radio station has played songs by him all day. I tuned into BBC London earlier and heard Robert Elms breaking down as he tried to compose himself to go on air. No one quite believes it.

Hubbie took this photo on his way to work in Brixton, it's become an unofficial shrine: 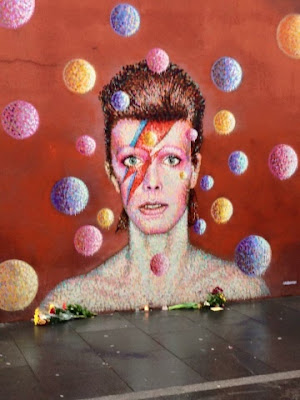 This evening when I got back from swimming I sat in the car on the drive listening to Lazarus. Before I had to open the door to whatever nonsense might be going on at bedtime. I just couldn't face taking part in real life and wanted to feel the emotion of music performed by a man who knew that most people would listen to it just after he had passed away.

If you look back at the titles of my blog posts you will spot that I often pilfer lyrics and titles from Bowie songs. On one of the rare occasions I baked a cake for the Clandestine Cake Club I called it Rebel Rebel and made it look a bit Ziggy Stardust. Any excuse really. Ok so I wasn't the only one who was in love with Bowie. It wasn't just about the make up and the incredibly attractive man wearing it. It's been a said a lot today that everyone felt like he knew them intimately and that the represented how we felt.

A lot of tributes have concentrated on how he was an innovator and reinvented himself so many times. He was also influential in LGBT politics as a figure who was open and honest about his own sexuality at a time when it just wasn't the done thing. He also challenged racism in the music industry and the preferential treatment given to white artists. The first time I found out about the ill treatment of the indigenous people in Australia was when Bowie made the video for Let's Dance featuring aboriginal actors/dancers. When he married Iman it made me joyous that he loved a beautiful black woman (ok her beauty is irrelevant to her skin colour) as it meant when he was bored of her he would be mine all mine.

London is clearly in mourning for this son of South London and the music he made is the best legacy anyone could hope for.

Personally I think this is pretty cool too: