The real Father Christmas and amazing ice skating - it's all at Eden.

I promised an update on our visit to the Eden Project while we were in Cornwall over Christmas. We were there in the summer and I was interested to see how much it changes in the winter. We had a whole day of activities planned taking in a visit to the Father Christmas experience, some ice skating and lunch as well as the land train which my boy loved so much on his first visit.

On arrival we were directed by elves to the trail where we had to find some corn to help make reindeer food to give to Father Christmas when we met him. As it was a dry day we walked all the way down instead of taking the land train saving that treat for later.

The biomes are quieter that in the summer and if you are a regular you may recall this is an update of a photo taken in the summer when there were sunflowers planted next to the wall my boy is walking along. We found the corn and put it into the tiny velvet pouch we had been given and my boy kept it safe in his pocket. We also had a bit of a stroll round the Mediterranean biome to look for the 'reindeer facts' that included 'whisper words' to write down to show that we had taken the trail. By the time we had done this it was time to go and queue to meet Father Christmas. Our boy was quite excited as we passed the ice rink and he could see the big machine smoothing the ice for the first skating session of the day.

Now bear in mind we've seen the big man a few times this year so my boy does have some expectations. When we got to the Father Christmas experience we were greeted by singing and dancing elves who were lovely with all the children and gave a fitting introduction to father Christmas himself. I have to say he was the most amazing Father Christmas I've ever seen. From the outfit, to the rosy cheeks and the wonderful storytelling style he just had us all captivated. Each child had the chance to go up and meet him and he gave them all a special crystal to take home. Our boy was so lucky that Father Christmas spotted Jiggles the Bear and made sure he had his own crystal too. 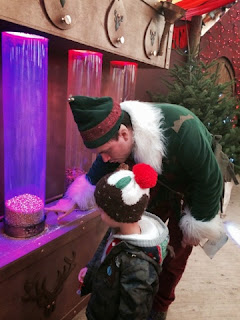 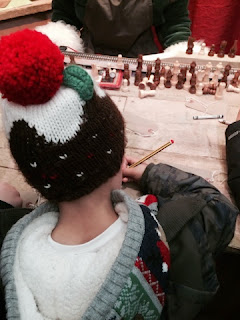 Once everyone had met the man of the moment there were other activities to take part in. These included writing a note to Father Christmas and playing games with the elves who sing and entertain the children including showing them how reindeer food is made. The elf in this photo showed my boy how to power up the crystal Father Christmas gave him to ensure it had plenty of magic powers in it then they made light pattens on the floor. As we left everyone was given a chocolate elf which didn't last long I can tell you !

There are craft activities taking place inside the Mediterranean biome during the day which when we went included making peg reindeer, handmade gift tags and an elf hat with ears. Of course we had to make the hat didn't we ? My boy even took off his pudding hat so that he could wear this one instead.

Our ice skating session was booked for the afternoon so we made the most of the dry weather and went for a play outside. These tractors are new since we last visited and they are just behind the Wee man made of recycled items that in front of the biomes. There is also a climbing area - well there were children climbing on it, so we took that to mean that's what it was for. Our boy is getting so brave now he insisted on doing it all himself until right at the end when he asked to hold my hand to get down. 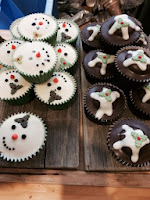 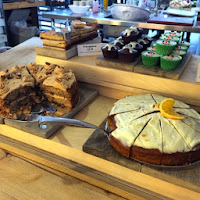 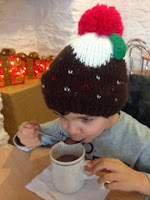 It was time for lunch and the food at Eden is amazingly good. The canteen food is prepared fresh and there is always a lovely smell when you walk around to get from one biome to the other. I had my eye on the stuffed butternut squash, but when we actually got to choosing lunch I had the spiced veggie pie with crushed potatoes and veg and it was lovely. There is always a great veggie selection and the cakes are phenomenal too. My boy had his heart set on having a cupcake so I promised he could have one after ice skating. He also had a babyccino which the lovely Leah made from hot chocolate as a special treat.

Then we came to the highlight for my boy which was the ice skating. There has been skating at Eden for ten years and it is in a spectacular setting with a lovely cafe to get drinks and small snacks and the skate hire and drop off is very efficient and simple. It's only the second time I've taken my boy skating and all the penguins were booked out so he had to cling onto the side rail or mine and Hubbie's hands at first, but despite a few slips and falls on the ice he was smiling the whole time. A kindly parent offered us the penguin her son's had finished with so he did get to whizz around on the ice eventually. It was great fun and the skating is open until the new year so there is still time to go. I would recommend it, but it does get very busy and the penguins get booked up early so do book in advance as the only have ten penguins for hire. 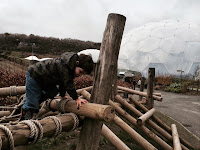 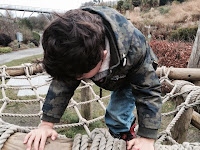 The Eden Project is a great day out and you can do so much in one day it's worth arriving early so you can make the most of your visit. You don't need to bring much with you and the food is reasonably priced, there are plenty of toilets, cloakrooms to keep large bags and things. If you travel by public transport or bike there is a discount on entry, but there is also a lot of parking available.

To find out more and to plan your day you can go here: www.edenproject.com. If you book online you also get a 15% discount

Disclosure: We are members of Eden and paid for the Father Christmas Experience, but were very kindly given complimentary tickets for ice skating.