Waterlogged wellies and a working loo (or how we do festivals) 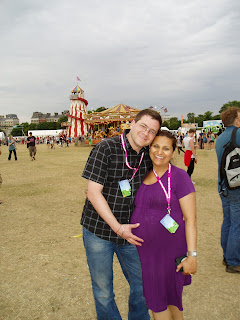 I've become obsessed with festivals. Not in a going to them way, but in a slightly envious of other cool families who take their kids to festivals way. You know those terribly trendy parents with offspring called Betsey and Oberon. They have those cutesie ear defenders for the mites and a laid back attitude to routines and showering. I'm just far too tightly wound to be like that. I can't sling a baby on my hip and a duffle bag over my shoulder and flounce off to a campsite for the weekend.

I've only ever gone to one day festivals (eg. Donington and Ben & Jerry's Big Sundae) as I like to wash my hair in hot water and to sleep in a nice comfy bed at night. I also have a pathalogical aversion to crowds, tie dye and overpriced botulism burgers. I like the idea of a festival, but I know that in reality I'd be permanently frightened of getting robbed or mobbed and I'd miss all the bands I want to see as I'd be searching for a clean enough portaloo.

Of course I'm aware that with our boy's love of music he is likely to want to go to festivals when he's older and I've started to plan for it already. He can go when he's old enough to buy his own ticket. It'll cost the same as a small family car by the time he's old enough anyway so he'll have to prioritise or go into a lucrative career if he wants to 'do Glastonbury.' I'm going to drive him there and park in the car park the whole time with a picnic basket and flask so if he gets soaked, robbed or bored he can get a lift to a pizza place for dinner or the Travelodge for a hot shower and breakfast. If he's really fed up I'll bring him home to watch the rest of the festival with me and his dad and we'll agree not to let on to anyone.

The first ever blog post I wrote 2 years ago was about how we watch festivals on the telly at home from the comfort of our sofa. So as a tribute to that post I've got an idea to get my son by until he's saved up enough to go to his first one. In order to give him the true festival experience and ensure I don't lose sleep or my sanity I'm prepared to do the following:


We'll charge him twice as much for a ticket the following year and he'll still come back for more. 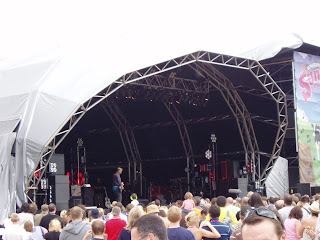 Email ThisBlogThis!Share to TwitterShare to FacebookShare to Pinterest
Labels: festivals, music, my boy