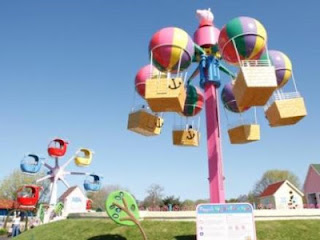 Well, after rain stopped play on Friday we finally got to Peppa Pig World yesterday and it was a gloriously sunny day. It was also quite busy, but actually not as bad as we'd feared it was going to be on a weekend. It was the first time we've taken our boy to a theme park on a day out so it was a new experience for all of us. We packed a picnic, bundled the boy and Grandma into the car and made our way to get there when it opened - we were not alone.

Those in the know arrive early and lots of parents I spoke to have been before and it says a lot that people come back so often. For us it was worth the queuing and the occasional tantrum as the whole place is designed for small children and the adults that they bring with them. Most of the rides were perfect for our toddler and there was plenty of space to eat a picnic in peace. Importantly there is babychanging in male and female toilets and the toilet seats are suitable for children and adults to use.

I've never been a great fan of theme parks thanks to my timidness on rides (even Miss Rabbit's balloon ride was a bit much for me !) so it was a big departure for me. I would definitely take our boy again though - not least as he's free until he's a metre tall and he's almost that already. As the in-laws live so close by it's also manageable for us.

It was a lovely family day out and our highlights included:

- the initial squeal of joy as our boy saw the sign showing Peppa, George, Mummy and Daddy Pig on the way in to Paulton's Park - you see we hadn't told him where we were planning to go

- seeing so many fathers wearing Daddy Pig t-shirts and insisting to their kids that they are the real one not all these imposter Daddies.

- carrying my son on my shoulders to meet Peppa and George - he has met them both before, but it was more magical to see them in their own house.

- the man who was overjoyed at winning a soft toy at the fiendishly difficult Candy Cat games stall only to be outraged that he was only allowed to win one toy per day, "I've got two kids, how is that fair ?" (well learning to read the sign that tells you the rules before you play might help !)

- my boy insisting he wanted to ride in a blue car on the Daddy Pig car ride all the way along the queue then his delight that he got to drive a blue car - dreams do come true son !

- our boy making a beeline for Peppa's teddy as he chose a toy from the shop just before we left to go home. He was holding it with genuine affection at the end of a tiring, but fun day. 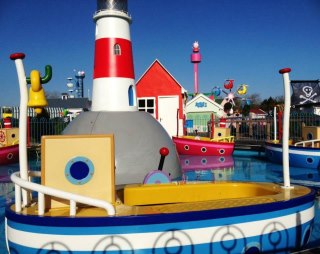 Before we left in the morning our boy was watching Peppa Pig cartoons in Italian and I think he might now be fluent - I only know that Miss Rabbit in Italian is "Signorina Rabbita" which might be handy for Miss Rabbit's ice cream parlour if she decides to branch out into gelato.

The power of the pink one is incredible and my only objection is that they only sell pink Peppa clothes for girls and blue and green George clothes for boys. The Daddy and Mummy Pig shirts are also gender specific which is disappointing when clearly boys and girls love Peppa Pig's family in equal measure.

Now we've tried this theme park I don't feel so worried about visiting Legoland or Chessington when he's older.

Just don't ask me to go on any of the big rollercoasters son - please.