Don't make me angry, you wouldn't like me when I'm angry 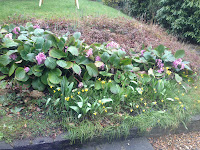 It's the first of June so it's officially the start of Summer today. In a few weeks it will be the longest day then the slow descent into the winter months again. Maybe it's the lack of proper sunshine that has left most of us feeling distinctly deflated. There have been a few good days and I've managed to get into the garden to do some weeding and hopefully tomorrow I can even plant some things that have been hanging around waiting, a few bulbs, some seeds and some plants that have been kindly given to me by a fellow Freegler. Just this week I noticed that the strawberry plants from last year are growing again so hopefully we'll get to them before the thieving squirrels this year !

The theme of growing has also added to my sense of low-lying discontent though. You see in a parallel universe I'd be struggling to garden and weed and plant. I'd be a little uncomfortable with the hotter days and probably have an even shorter temper with my toddler who is fully embracing the terrible twos right now. Twice recently Hubbie has asked me "when is your anger management course starting again ?" when I've lost it over something entirely unwarranted (a chipped plate was the most recent cause of consternation).

What he's missing is the thing that I'm missing. In the parallel universe I'd be seven months pregnant right now. The talk about Kate Middleton's pregnancy would bring a rolling of the eyes as I'd pity my poor little one for being due just after the royal progeny. I'd be planning for a second child and talking to my son about the younger brother or sister he'd be having soon. Instead I'm marking time when I would have been having a scan, would have been avoiding runny eggs, changing my yoga routine to be more baby friendly. It's not that I think about it every single moment of every single day, but it is there and I can't pretend it's not.

On a Sunday morning last December I found out I was pregnant. Hubbie and I were delighted and immediately excited about when to tell our parents they were to have another grandchild. We talked about how and what to tell our son. We were generally grateful and overjoyed. The next day the news broke that Kate Middleton was pregnant and we joked that our big news had been hi-jacked by the royal baby. Not that we were about to tell anyone just yet of course.

I made an appointment to see the doctor and updated my iphone apps from conception to pregnancy ones. Only something wasn't right. I couldn't recall exactly how I felt the time I was pregnant before - mostly complete disbelief and joy - but there was something not right. The doctor was dismissive and said "let's just see what happens," and everywhere I looked there were references to miscarriage. I mean everywhere.

Then it was gone. Completely. No drama, no cinematic moment, just gone. Now, I'm aware that this happens all the time and has happened to a lot of people I know. We were devastated, but made a decision to just treat it as if nothing had happened, after all it was so early if I hadn't tested I wouldn't even have known. So we made a deal to 'keep calm and carry on." I told a few close friends and left it at that.

We had Christmas and didn't tell our families. It was tough and it was sad, but we are so blessed to have our son already and he is wonderful (when he's not yelling or demanding or spilling or… you get the idea). We looked forward to a new year and new adventures and it looked like we'd really be able to put it behind us. Only I haven't really.

I know I'm not unique. I know it happens very often. It just haunts me. When I see women who are as pregnant as I'd be right now. The almost constant focus on pregnancy in the media. My inability to go a day without bursting into tears.

And in case he asks again the anger management course starts in two weeks. 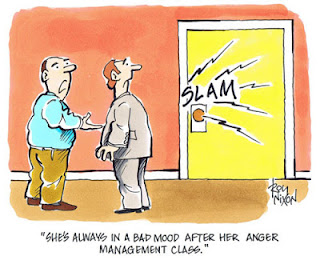