Foodie Friday: Life is all about Chocolate, Chips and Cake. 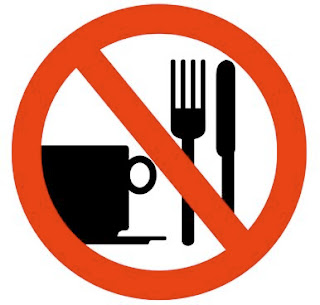 I met a friend for dinner last week and she reached into her bag before eating so she could check what she was allowed to eat. I asked the obvious questions, 'on a diet ?' 'Pregnant ?' Turns out she has IBS and has been advised to avoid certain foods. Now I am way ahead at this particular party as I had severe problems with food around ten years ago and it took the GP two years of testing to conclude I had stress related IBS. Frustrated by the medical advice to eat charcoal (for real !) I decided to have a food allergy test at a health store to see if there was anything I should be aware of.

Now I know I brought this on myself really and if you have seen a 'nutritionist' or a 'holistic therapist' or spoken to anyone from the world of food health you won't be surprised by what the nice man told me after a highly unscientific test undertaken in the shop. I was advised to avoid: bread, caffeine, chocolate, onions, peppers, cabbage, red wine and red meat. In fact the only cliche he managed to avoid was that he didn't tell me to stop eating dairy.

The world of 'healthy eating' seems to be all about exclusion. We are advised to cut out wheat, sugar, dairy and caffeine. It's supposed to 'detox' the body. Now I don't know about you, but I don't feel toxic when I have a cup of tea. I feel pretty horrific at the thought of custard, but that's a preference thing. I used to feel a bit poorly if I overdid it with the wheat and I haven't drunk real coffee in ten years, but give up sugar and tea ? Give me a break. What's the point of living a long and essentially crappy life ? No cake - no tea - no hot buttered toast ? I realise that some people have genuine allergies to foods and I get that, what I'm talking about here is the self-imposed misery of food exclusion either to lose weight or to stay well.

I tried being a vegan for a few months in my first year at University. It struck me that as I already didn't eat meat I could easily be a vegan if I skipped butter on chappatis, left out the raita with my food and denied myself my beloved boiled egg and soldiers. However, I did struggle with tiredness, terrible skin and I was the most miserable I've ever been. I can see why Morrissey is such a grump most of the time -- hence it was only a shortlived experiment. 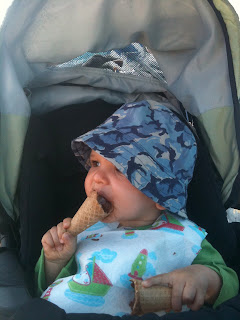 If life is about anything surely it is about enjoyment and experiencing and trying new things ? If I didn't eat sugar I'd never have tasted the exquisite chocolates from Rococo in Chelsea (also available online).

If I gave up dairy I'd never enjoy Ben & Jerry's ice cream on a hot day in Clapham Common watching live music and seeing the sheer bliss on my son's face as he scoffs two cones at once.

If I stopped eating wheat I would deny myself the pleasure of eating toast or pancakes or chappatis or cake. Personally I don't see wheat as the enemy, I love it. Most cultures in the world have a wheat based diet be it pasta or chapattis or bread and who am I to fight against those odds ?

This week I've made peanut butter cookies (a bit crumbly, but taste great), chocolate chip cookies (the boy loves these) and honey cookies (wanted to use up a jar of honey, they smell incredible and taste very sweet, but the boys both devour these for breakfast !). The simplicity of these and the happiness they create in my home cannot be overstated.

All of which is a very long-winded way of saying that I'm going on a bread-making course this weekend. It's with Daniel Stevens who wrote the River Cottage bread handbook and promises 'all the bread you can eat' as well as lunch and wine - sold !!!

It's a very early birthday present from Hubbie and I'm ridiculously excited about it. I will take photos and tell you all about it next week.