It takes a village - and a cat - to raise a child.

I watched the movie Mommie Dearest the other day for the first time. I have heard of it, but had never seen it. If you don't know it, the book was written by Christine Crawford about her adoptive mother Joan Crawford and the cruelty she inflicted on her children. I watched Faye Dunaway screaming at her kids for having wire coathangers and witnessed them cowering in fear. There was a clutching feeling in my chest as I thought, oh god I hope my kids they don't think I'm like that when I shout at them. Brown Bear was staying at my Mum and Dad's house and while I was pondering how terrible a parent I am, I got a message from my sister. It said he was telling her he had 'the best day of his life' with me last week when we went to the Lego store and BBC Radio London. Phew, I'm not Joan Crawford. On the scale of parenting it goes from Joan Crawford at one end to ... Oh I dunno probably Mary Poppins and she's not even a parent.


One of the things that worries me most is that I'm not a great parent. That I shout too much. I don't cook enough. I tell them off when they are just being kids. That I indulge them and they will become spoiled. Basically everything. So when they offer any form of praise or suggest I've got it right I'm proper chuffed. It doesn't happen that often. I have accepted that being a parent means I'll get it wrong at times and the kids will notice. What they also do, however, is forgive me.

Brown Bear goes to stay with my parents sometimes and Blue Bear has stayed with Hubbie's parents in the past. The kids know what they can get away with - a lot - and push their luck by doing the cute baby faces and big eyes to get what they want. In Brown Bear's case that means chocolate spread for breakfast, McDonalds for lunch and so many new toys and clothes that his trunki barely closes when he has to return home. Blue Bear has simpler expectations. He likes to play with all the toys and drags Grandpa around to build railway tracks and play with him. He often just plonks himself on Grandpa's lap and waits for sweets to appear. It doesn't take long.

I asked my Mum what it was like to be a grandparent and she told me that it was like the reward for parenting. That you invest in your kids and the return is the grandkids that you spoil and fuss over. All in the knowledge that the parents have all the stress of raising kids that they already went through. Of course filling the kids with sugar before sending them home is just a bonus.

We also have a secret weapon in our parenting armoury - the cat. Neo has been teaching my kids to be good cats for years. He is expert at it now. Years ago he trained Brown Bear to open the tin of cat biscuits in secret so when I said no he would still get treats. The two of them cuddle up together and snuggle and Blue Bear has been jealous of this closeness for a while. Then a few days ago - while Brown Bear was away - Neo decided it was time to train Blue Bear as well. I watched as my son crawled around behind the cat copying him washing his paw and face and then observed as Neo stopped and waited for him to catch up when he walked off. It was adorable.

He showed Blue Bear how to eat and drink like a cat: 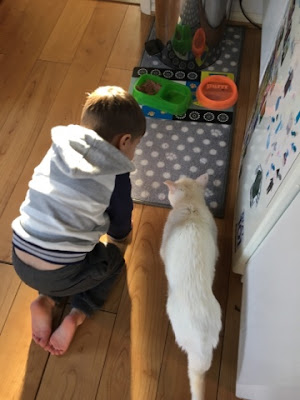 He likes to sit under the clothes airer and meditate - looks like Blue Bear does too. 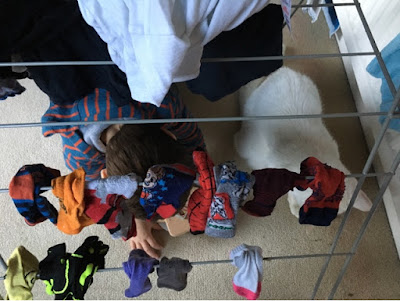 After an afternoon of cat training they both needed to relax. 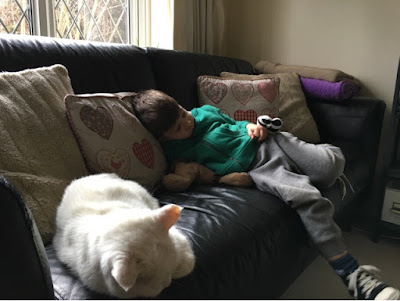 I am still going to worry about how inadequate my parenting is, but at least I have some great helpers.