A sea of poppies and a huge hippo: What we did with our 'extra' hour

Having an extra hour in bed was never an option for us with a boy who has always been an early riser and a cat whose internal clock tells him it's always time for a meal. We had already planned to visit the Tower of London today to see the remembrance exhibition today so as we were all up so early we decided to go first thing to avoid the crowds. It was worth the effort of getting out as there was very little traffic and the boy was able to travese Tower Bridge with barely anyone else on it. 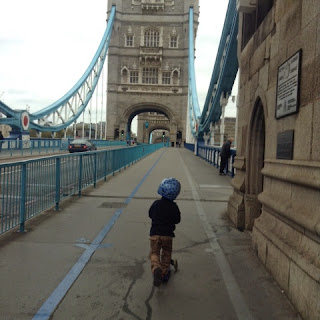 When we arrived at the moat we explained to our boy that he had to be respectful and not toot his scooter hooter while we looked at the tributes as some people would be having some quiet time. He did very well and listened as we told him what poppies signify and that there are thousands of poppies to mark all the lives that were lost in the first world war. 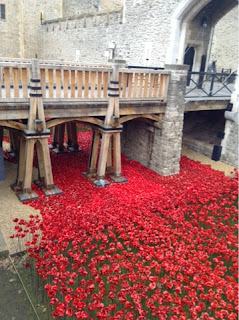 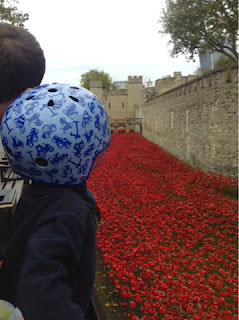 The last time I was at the Tower of London was during the epic Honkopoly adventure earlier this year when I scootered around with a lot of other bloggers to raise money for Comic Relief. I sympathised with my boy scooting along the cobbles as it's not that easy. He wasn't too keen to be photographed with a Beefeater though and went all shy so we don't have that classic picture. We do, however, have some lovely memories of the amazing spectacle of thousands of ceramic poppies to commemorate the loss of life in the war.

I'm not sure how much my son actually understood, but when we got home he drew some pictures of the poppies and we talked about what they meant. He recalled that they were in memory of people who had died and when we talked about how it felt to see them he said he was sad. He asked about this image of the bugler playing during roll call and we talked to him about family members who had been in the military and how important it was to us to remember their service. 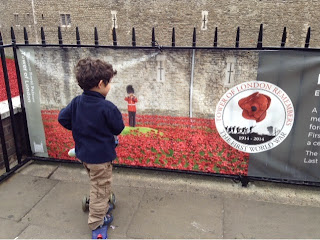 It's just as well we also did some fun things with our extra hour this morning. After the seriousness of explaining the meaning of remembrance we went for a stroll to St Katherine's Dock. This crazy character is "HippopoThames" and it's an installation that is apparently moving around the dock of its own accord !!

After meeting the hippo we were heading back to Tower Bridge when we spotted this giant sundial which we have never seen before. The boy didn't believe us when we told him it wouldn't turn around, so he did give it a go. Well, why not ? 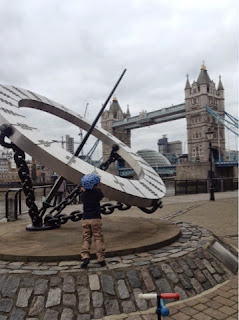 In the past I would have spent my extra hour in bed, but I'm so glad that we went out and started our day early today. We got to do so much more than we expected and I hope our son has some idea of what it meant to us to do this together. 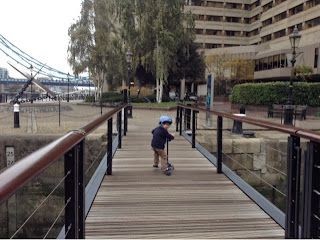