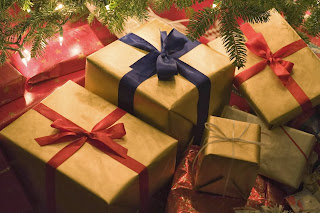 I was sorting out the Christmas presents that I've bought so far into piles on the floor of the front room yesterday. I do this every year so I can see if everyone has roughly the same number - important when
you have siblings - and I always have far too many for Hubbie and the boy and a much smaller pile for my Dad. He has fewer despite having a birthday on Christmas Eve and it's because he has no hobbies or interests and is not the most gracious at receiving presents. I always buy him something, but long gone are the days when I tried to get things he'd like and now I make sure it's something he can use. As a family we used to always play safe and give him Baileys or whiskey and lots of chocolate, but a few years ago he was told he was diabetic so the 'safe' presents became anything but. It does lead to some genuinely unimaginative present choices like gloves on his birthday and a matching scarf on Christmas Day - which of course he says he doesn't need.

Anyway, the present sorting, then wrapping and transporting to give to various family and friends is an annual event so our cat has witnessed it for a few years now. That is the only way I can explain what happened this morning. Before I tell you the story you need to know some pertinent facts:

1. I am short-sighted, not badly, but enough for things to appear blurry if I'm not wearing glasses

2. From the beginning I believed Neo - the cat - was a buddhist with 'love all living things' attitude to life

3. There are a lot of leaves in our garden and when Neo comes inside the house he often has them stuck in his tail 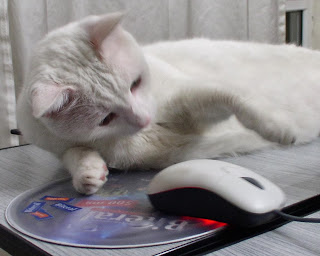 So this morning I was in the kitchen making a cup of tea and getting some breakfast when I heard the cat flap clatter shut and heard Neo announce his arrival. I glanced over at him and said, "Morning Neo, been bringing in leaves again have we ? Ooh that's a big one isn't it ?" As I went to leave the kitchen the 'leaf' scurried past my foot. My screams alerted Hubbie (eventually) and he came down to deal with the matter still wet from the shower and holding his towel round him in one hand and - after some coaxing - the mouse in another. Then I remembered how he used to hide Neo's kills from me so that I would not be disabused of my insane belief in the cat's non-existent buddhism. They were in it together. Neo bringing in gifts and Hubbie taking them outside again.

So the cat is channeling his inner feline Santa and Hubbie is enacting a literal interpretation of Mice and Men.