Attachment parenting: I swear by it.

I'm not going to get into it about the Peaches vs Hopkins TV 'debate' on attachment parenting. I didn't follow it and neither woman is a parenting role model I'm about to emulate. I am all for attachment though and was listening to Oliver James talking about lovebombing on Radio 4 yesterday afternoon. As a result today has been spent loafing around and doing as little or as much as my toddler wants to do. You see I like the idea of responding to what my child is interested in, but I'm not about to advocate my skills as a parent above anyone else's. I'm doing my best and I sometimes over-do it or get it wrong. Mostly I am just glad that he's a happy child and that he loves us. 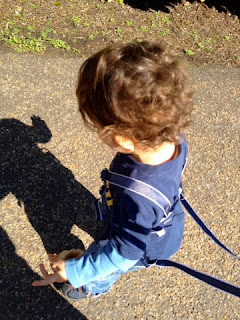 If anything I've probably been over-attached. I never left my son alone at all when he was first born. I would shower while Hubbie was home either in the evening or stupidly early in the morning. I honestly thought that if I left my baby for longer than it takes to make a cup of tea he was going to roll over (which he'd never done) or stop breathing (he's still here).  Of course I do still check on him - old habits and all that - but now I stay in bed rather than shower at 6am. That's hardly tiger mama behaviour is it ?

As he's a toddler now I do go and shower and leave him to his own devices (watching telly, creating a 'traffic jam' with his toy cars or playing with the hands free soap dispenser if I've forgotten to put it high up) for around 5-10 minutes. I do have to keep calling every 30 seconds to check he's still in the house though as he can't be trusted not to open the door if someone knocks. Grandma was babysitting on Halloween night and as she is quite hard of hearing he heard the door knock and went to answer it - only to be confronted with two rather terrifying teenage boys in masks. They didn't get any sweets, but the boy got a proper scare !!

The other night Hubbie opened a belated birthday card he'd received that had been sent to the wrong house with the wrong age on it. He affectionately called the sender a nob - supposedly out of earshot of our boy - only for the boy to start saying 'nob, nob, nob, nob' in a sing song voice. I gave Hubbie my 'silly boy' head shake and he responded with, "actually, he may have heard that before in the car driving to football." I suppose it could be worse. I'm not sure how though. 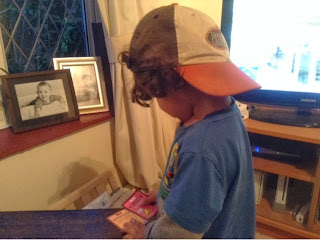 Up until now my son's idea of bad language has been to point at me and say 'Oh. Dear.' forcefully as that is what he thinks swearing is. We're also working on discouraging the 'toilet talk' which he loves right now. As an example.
Me: "What did you do at nursery today little bear ?"
Toddler: "Bum Bum."
Me: "I don't think you did. What did you have for lunch ?"
Toddler: "Poo Poo."
Me: "Ok that's enough toilet talk for today."
Toddler: "Wee Wee."
Me: <sigh>

I'm not expecting a call from anyone asking me to share my parenting secrets any time soon. I am, however, expecting to be embarrassed by my son's vocabulary some time in the near future.

When If he calls Santa a Nob Poo Poo I'll look around pretending he's not with me, but that's when all my attachment parenting will come back and bite me in the 'bum bum.' 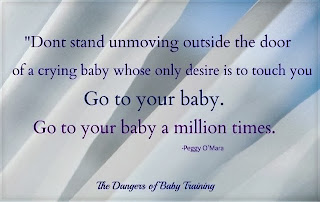