Adoption week: Our story then and now...

If you've been reading this blog for a while you will already know that adoption is very close to my heart. This week is National Adoption Week and there will be a great deal going on to raise the profile of adoption and to - hopefully - encourage more people to consider adoption.

We are very well versed in the process of adoption in our family. I have worked for children's organisations over the years where I've witnessed how life-changing adoption can be for the children and the parents who take care of them either as foster carers or adoptive parents. I also know that it isn't all shiny and lovely and often children have experienced difficulties and losses before they find a family that they feel part of and safe in. Sadly, for some children this never happens and the prospect of a 'forever family' is one that they can only imagine. It is because of this experience and my passionate belief that taking care of each other is what makes us stronger as a society that when I met Hubbie I explained that I would like us to consider adoption. He had never thought about it before, but was open to the idea. 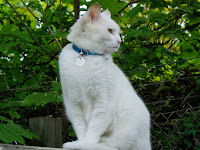 Our cat is an adoptee from Battersea Cats & Dogs Home. He lived with other families before us, but has adopted us as his family now and we seem to have passed his test for humans he can live with. When I go out in the evening he stands outside in all weathers waiting for me to get home. Last week me and Hubbie went out for the evening leaving Grandma to baby and catsit. Sure enough when we  got back there was the cat on the front step waiting for us to get indoors safe. Grandma told us he'd been going in and out of the house to check where we were all night. This taking care of each other is a two way street you know.

As you will already know we did not have the most straightforward time starting a family and made a decision to adopt rather than pursue assisted fertility or any other options. There is no judgement implied or meant, that was just our choice. It was also empowering as we felt we were making a positive decision rather than waiting for something to happen to us. So we decided that we'd go ahead as we had talked about adoption anyway so why not just do it. It wasn't such a big leap from wanting to be parents to making an active choice to see if we could adopt, but there was a lot more to it than either of us had expected. The preparation course taught us a lot about each other's motivations as potential parents and the whole process of being assessed by our social worker was thorough, but ultimately we understood how important it was to ensure we would be suitable parents.

By the time we went to the panel in March 2009 we were prepared for all and any questions. For some reason we had 13 people on our panel (that is far more than you would expect) and it was quite intimidating facing mostly strangers who held the keys to our future as adopters or not. Thankfully we were approved and the long wait to be matched with children began. I thought that the panel was going to be the toughest part, but nothing prepared me for the waiting. The stories of how children came to be looked after broke my heart and every single child we were asked to consider I wanted to adopt. Hubbie spent many hours consoling me as I wept for the children who were kept waiting too.

It felt like a long time, but while we waited to be matched we found out we were expecting our beloved boy - this is not uncommon apparently. So we moved on from prospective adopters to prospective parents. Since then the process has been streamlined and the time it takes to be assessed is shorter now. As we consider adoption for the second time we are in a new situation as we also have a toddler in our family now and his needs and feelings have to also be taken into consideration. Helping him to understand and participate in the process will be challenging in a whole new way, but having done some of this before I think we will be ready to help him with an exciting new phase of family life.

If you are interested in finding out more about adoption and how it works please listen to this interview I did on my radio show with an adopter and an adoption social worker: Adoption podcast

It is also worth taking a look at www.nationaladoptionweek.org.uk