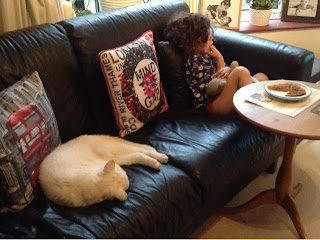 So this was the first Bank Holiday I've spent where I was away from my boy for a full 24 hours without seeing him at all. He woke up and went to sleep without me or Hubbie there to tuck him in and he slept fine and woke up full of the joys of a weekend spent with Grandma and Grandpa. I barely slept a wink (and not because of the sofa bed in my friend's house) and woke up feeling tired and wanting to call him. It was too early at 6am so I held out until after 8am and he was all cheery and waiting to tell me he'd eaten Weetabix and a Peppa Pig yoghurt for breakfast. Phew !! 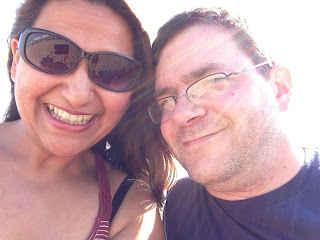 Hubbie and I had a lovely leisurely Sunday morning with friends who treated us to a luxurious brunch and we even bought a Sunday paper which we later read on Brighton Beach. I recall years ago a friend telling us that once you have kids you'll never have the time to read a Sunday paper again. He was right as this is the first time since our boy was born that we have had the chance to. I also remembered my friend Lisa who came to our wedding sans infants as her two had gone to visit their Grandmother in Belfast with their Dad and she said she felt like a piece of her was missing the whole day. I felt like that this weekend.

I had a lovely time with Hubbie and it was great to go to a 2 day festival and do grown up stuff like getting stuck behind hundreds of mods on scooters on their way from Brighton to Eastbourne. We did make it to see the band just in time, but only just. Oh the spills and thrills !! It was even better as I knew from talking to our boy that he was having a wonderful time ruling the roost at his grandparents house so I wasn't worried about him at all. I did, however, feel like a part of me was not there. Everywhere I went I had to talk about him so everyone would know I am a Mum and I have a son and even though he isn't with me he is a part of me. 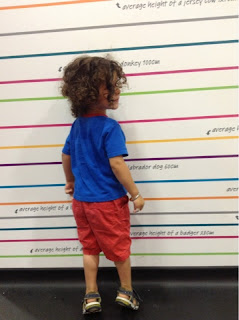 In his own way Hubbie also showed his parenting credentials by wearing his Daddy Pig t- shirt. However, standing in a children's playground unaccompanied by our son he did look a little suspicious so I have advised that in future he only wear it when he has the boy close by so that people don't mistake him for a wrong 'un.

When we got back to Grandma's late last night I put my head round the bedroom door to see my boy sleeping and my heart felt whole again. I slept soundly and woke up keen to hear the tell-tale jingle of his beloved bear that signals he's awake and moving around in bed. He smiled when he saw me and asked where Daddy, Grandpa and Grandma were.

Tonight when we were home and had our usual pre-bedtime chat about our day he told he he'd had a 'lovely holiday at Grandma's house.' I asked if he'd like to do it again and he said he would.

I hugged him a bit too tight and he put his arms around me.

Maybe next year I'll be a bit less anxious about it all.