February is crazy time - it's the shortest month with the most going on from dragon dances to pancakes to lovehearts to half term fun and the return of Creme Eggs !!

We are now in a new year on the Chinese calendar and last weekend we stumbled upon a dragon dance taking place in the most unlikely quarter of downtown Croydon. My boy found it all a bit too much with the loud drumming and large headed dragon, but he talked about it afterwards with glee so I'm pleased we experienced it first hand. Chinese New Year seems to have become lost in the glut of celebrations that we have over this short period, but we did made a lovely paper dragon at playgroup last week so the year of the snake hasn't entirely gone unnoticed.

Then we have shrove Tuesday - a magical day dedicated to the simplest foodstuff known to humankind that brings a smile to my boy, Hubbie and me all at once. We pile ours high with fruit and tuck in most weekends, but to have a special day just for pancakes is something else.

My boy made pancakes at nursery today and he was delighted to report that they were "delicious" a word he says with relish and saves for only the best foods. Poor Hubbie had a horrendous journey home so imagine how wonderful it was to come back to mini pancakes with bananas and maple syrup as a treat for my boys instead of their usual teatime.


Later this week we have one of the busiest nights in the restaurant world and the day that florists make more money than any other with the possible exception of Mothering Sunday. Valentine's Day causes so much consternation for new couples who don't know if it's too soon to go overboard on gifts and established couples who either have a 'routine' or feel it's all been done so what's new any more ? 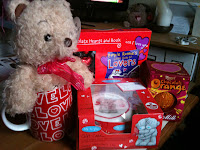 In the past we have always taken turns to make a special meal at home rather than go out, but now that we are parents an evening out just the two of us is such a rare treat that we have decided to go out for a meal despite it being a cliche. I start planning gifts a long way back so by now I've got a pretty good stash of pressies for both my boys (sshhhh don't tell them !!) I am fascinated by the offers from dine in meals to overpriced roses to 'sexy' underwear. If you are in any doubt as to what you are supposed to give the retail sector will give you a lot of ideas.

Next week is half term then we have the preamble to Easter - the bus posters claim that Creme eggs aren't around for long, but seriously don't we just have them all year round now ? With so many celebrations in close proximity February is a pretty sugary month.

When me and Hubbie were first dating we used to celebrate everything. Any excuse to go out or to give each other gifts. So we would do the pancakes on Shrove Tuesday, the card and fancy meal on St Valentine's day and a tonne of chocolate at Easter. Hubbie makes the same promise each Lent to give up eggs and cauliflower (neither of which he eats) even though neither of us are Catholic or Christian.

I guess we just like having markers in the year that remind us where we are and give us excuses to celebrate.

Now it's even more fun as there's someone for whom it's all new and exciting as he's doing them for the first time. (Just don't tell him that his Valentine is from Mummy).

Email ThisBlogThis!Share to TwitterShare to FacebookShare to Pinterest
Labels: chocolate, my boy, son