Apparently last weekend was the traditional time for baking and setting aside a Christmas pudding. In Hubbie's family it was always Children In Need weekend and I understand that mother-in-law has already made a start on theirs. I don't make my own pudding and besides we still have the Heston hidden clementine pudding from last year so we'll probably crack that open at Christmas. It's just right for us and if my boy wants to try some he might prefer the orangey bit (in a jaffa cake sort of way). 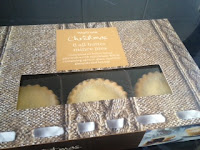 Years ago I used to make my own mince pies and took great pride in sharing them out. Nowadays it seems there are a lot more fussy folks out there as people don't like the mince filling or the pastry or something and with so many types for sale: gluten free, icing topped, puff pastry, etc. I just skip it and if we fancy a mince pie I buy some luxury butter pastry mini ones. I think I might make some with my boy this year. I'm sure he'll love rolling the pastry and spooning out mincemeat. Once I've popped a cute little ribbon on the box they'll be the perfect gift for grandparents complete with teeny tiny fingerprints in the pastry.

In recent years I have, however, taken on the task of baking a Christmas cake as both Hubbie and I do like it. The first year I bought a Delia kit from Waitrose and followed the instructions and it was ok, but massive. The following year I tried the Mary Berry kit from Tesco and it was very good. They also had a kit to make seasonal Mary Berry cupcakes which were sensational so I've kept the recipe to make those again (unless Tesco do a kit again in which case I'm stockpiling those !) I've gone back to Waitrose this year as the kit comes complete with icing and marzipan too - and it was on special offer a few weeks back so it was a bargain.

I've also branched out with the Waitrose gingerbread tree kit complete with icing and edible glitter. When I opened the box I felt like a bit of an amateur as it wasn't even a mix, but an actual bag of dough ready to roll out. Now I'm all for short cuts, but this was a little shorter than I was expecting. If I'm using a kit I like to be involved in some way whether it's to add eggs and butter or to mix a few packets together. Of course baking from scratch gives a genuine homemade taste, but sometimes it's just too tempting to try a kit and see how it goes. I'm going to freestyle it with the gingerbread by using a fabulous intarsia shaped baking mould that I was given by a friend last year. It is meant for shortbread, but I think this kind of crazy renegade behaviour is what makes home baking so exhilarating !

The fridge is packed with ready made pastry; all butter puff, pizza dough, shortcrust, croissant dough and I think I've got some filo somewhere. I spent last Saturday lying on the sofa watching cookery programmes and Lorraine Pascale was making canapes and treats on her show, so I decided that if ready made is good enough for her (and is on special offer) then who am I to argue ?

So I'll post photos as I go. If you want to know how the homemade sausage rolls (meat and veggie), Christmas cake, Christmas cupcakes and gingerbread tree turn out keep tuned to www.twitter.com/SwaziRodgers. Comments appreciated, marks out of ten optional :o)


p.s. this post isn't sponsored by Waitrose, but it would be lovely if it was :o)