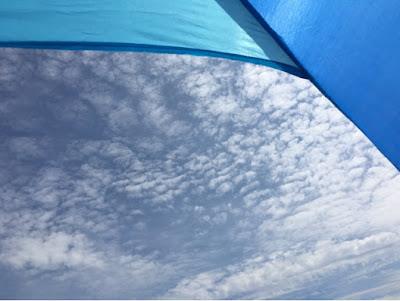 I grew up in a family that didn't take holidays. If my mum was able to save up she would book a caravan for a few days in North Wales or Devon. We'd be driving all day with nothing to do in the car and would always arrive late (usually in the dark) and would pretty much all complain the whole time. I consider holidays with my kids now to be my karmic reward for this. When we go away I pack the car, arrange for someone to feed Neo and Hubbie charges up the kids' devices so they are busy during the journey. We always leave early to get to our destination during the day and try to get the boys settled as quickly as possible. Once we've located the nearest play area I can unpack and put on the kettle.

The last time we went way was at Christmas and the boys were a nightmare. They argued and fussed all day every day and it was just horrible. At one point I told Hubbie to just get the train back home as his complaining was almost as bad as they boys' behaviour. He stuck it out and we had a miserable time. So what possessed me to book to go away again ?

Well, I noticed that all the families at my son's school have plans for the summer and they pretty much all involve going abroad. We don't take the kids abroad yet, but we do try and get away for at least a week over the summer. In the last few years we've been going to Cornwall because it's so beautiful and there is so much to see and do. There are places we all love to visit like Lappa Valley and then the Eden Project which I am a massive fan of and I bribe the boys to go to with the promise of a pasty for Hubbie and big slabs of homemade cake for the boys. 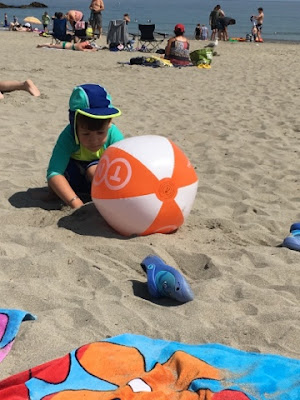 We're staying a lovely cottage in a part of Cornwall we've not been to before. Yesterday we went to a beautiful fishing village then spent the scorching afternoon on a beach with they boys paddling in the sea and then playing in the sand. It was pretty much what I had hoped for. There are young children living here who knock on the door to play with the boys and yesterday when we got back from the beach they had a paddling pool out so our boys jumped in with them and had a great time before dinner.

They woke up this morning and were playing and mucking about together - which is great, ast least we don't have to supervise them every moment. I got them to sit for breakfast and put some bacon under the grill for Hubbie. I had managed to cut the bread using the bluntest knife since those kids' knives you get in Ikea and made myself a tea. Hubbie took the bread I'd hacked for my breakfast and I eventually sat down to a stone cold cup of tea, mostly burnt toast and a not quite cooked egg - yummy ! 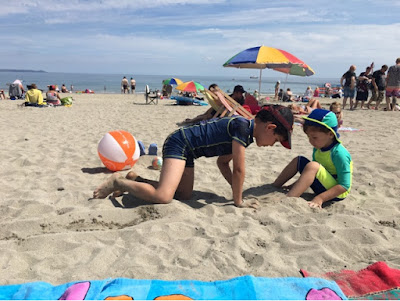 We used to have holidays that involved drinking on the plane and staying in bed until we wanted to get up. Breakfast made by someone else. Lunch with cocktails or wine. Dressing up to go out in the evening. Tours and walks in the local area and not a play park in sight. I rarely visited a supermarket for cereal, plasters or colouring pencils. Everyone keeps telling me, "they're not young for long," or, "enjoy it," and my personal favourite, "It gets worse when they are older." Oh joy.

Well. I've got to pack a coolbag with drinks and snacks so they don't have to go any length of time without consuming something. They will still insist on buying something to eat anyway. Probably ice cream. Oh well we are on holiday I suppose.