I'm not big on sending postcards really. I find that they often arrive long after we've come home and I'm not convinced that anyone really wants them these days. Facebook has enabled us to all share our own images of places we've been to so those revolving racks outside souvenir shops appear to gather dust as people bypass them. We once received a postcard about 2 years after it was posted during my sister's honeymoon. I remember being very surprised that it made it at all after so long.

The other reason I don't always buy postcards it because they don't necessarily capture what I want to share about the place. I bore most people with how much I love Cornwall and the specific things that I love don't always feature on the souvenir items. Here are some highlights from our most recent visit.

On our first night we went for dinner in Looe to a place called Cornerstone. It's an american style diner - which appeals to Hubbie - and the milkshakes alone are worth a visit. I can also - however - recommend the veggie burger.

In the morning I went for a run. We were staying near woodlands and the Deerpark area is stunning - as is so much of the area.

We took a drive to Polperro to explore and it reminded me a little of Portmerion in Wales. The scenery is just breathtaking. Brown Bear asked if he could touch the water so I let him carefully walk down the steps to the waterside and Blue Bear warned, "Be careful, it's dangerous."

On the walk back to the car park we spotted the model village with signs of train lines - a favourite of the boys. They were really keen to take the Polperro Tram - it's nothing like the ones where we live.


The weather predictions weren't too promising one day so we decided on a nature day and visited Golitha Falls. I have no idea why I thought Fitflops would be the ideal footwear for a walk in the woods, but we did enjoy it very much. Blue Bear wasn't keen to go too far so he stayed with Hubbie and played pooh sticks while me and Brown Bear followed the falls until it became a bit too treacherous underfoot.

I've mentioned many times how much I love the Eden Project at Bodelva. I visited when it first opened and have been a regular visitor for the last 5 years watching it develop and change with each visit. Last year we went to see Manic Street Preachers perform at the Eden Sessions and it was fantastic. I never tire of this place and on this visit Blue Bear seemed to really enjoy himself. He loved the plants, the activities and even spent time in the rainforest biome admiring the waterfall.

Our last full day was spent at Lappa Valley. The clear winner of best family day out for us. To get there you take a steam train - we travelled with an engine called Ruby - and once you arrive there is a boating lake, a diesel train, electric cars, a huge playground and crazy golf. My boy love it here - yes that includes Hubbie. He even suggested we take a later train back to make time for an ice cream !


On the way back from Lappa we had time for one last stop so we decided to visit Fowey (pronounced "foy"). It's a steep walk down to the sea, but it's worth it for the views. Also we went to the best fish and chip shop ever. It's attached to the brewery so they sell alcohol and the chips are delicious ! Definitely recommended. 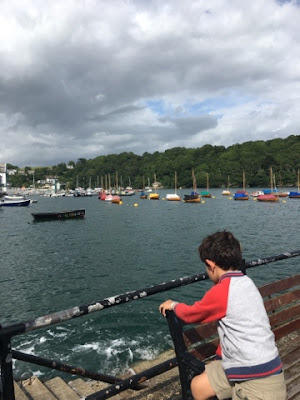 I'm so pleased we decided to visit some new and different places this holiday. The boys are taking more of an interest and it's fun to take them exploring. We even had good enough weather for an afternoon on the beach and they both paddled in the sea. I hope that's what they remember when they look back on their childhoods.