You know how you don't notice people close to you getting older ? One day the kids are tiny and then seemingly in the blink of an eye all their trousers are too short and their shoes are too tight. I remember going to the funeral of an elderly aunt and as I parked up at the crematoriam I spotted my Mum with an old man sitting in her car. I asked my sister who the old guy was and she said, "That's Dad." I hadn't seen him for a few months since he'd stopped dying his beard hair and with his turban covering his hair I just didn't recognise him. It was a bit of a shock.


Recently a few people have remarked on Neo's advancing years and have asked what we have planned for when he's no longer with us. Now I know there is no intention to be unkind, but I just don't think of him as an old cat. In my mind he's practically kitten-like in his leaping onto the neighbour's wall to sunbathe all day and his plaintive miaowing for food hits decibels previously only heard at a Metallica gig.

I know people make comments about pets being part of the family, but Neo really is. He sleeps on Brown Bear's bed and is an excellent childminder, giving the boy hard stares if he doesn't settle down to sleep without fuss. He always used to check on the boys when they were small and gave them a wide berth when they were at tail-pulling age. He's no fool that feline.

Then I noticed he's not grooming himself as fastidiously as he used to. His claws are longer and he gets them caught in the carpet sometimes. His fur is looking distinctly yellower and while he was always a champion sleeper he's really snoozy now. The vet told me the other day that he's the cat equivalent of a human 75 year old and considering how inactive my father and father-in-law are at the same age I think he's doing pretty well in comparison.

He helps Brown Bear with homework: 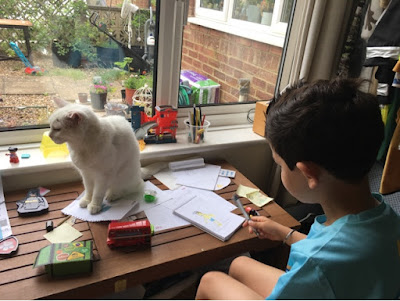 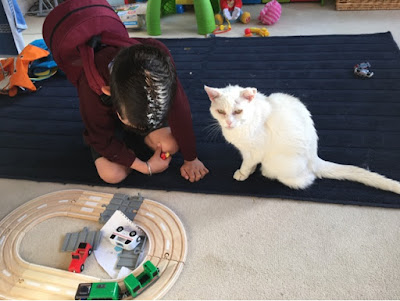 And his skills at hide and seek are legendary: 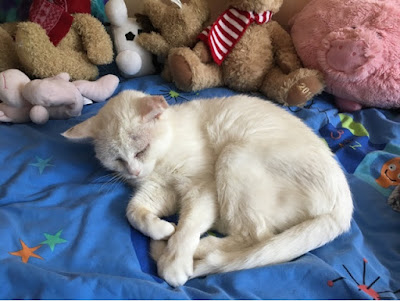 So, yes my cat is a senior now. He is showing signs of old age and does need some help to keep him comfortable. He is still, however, my first boy. I have never lost a pet by conventional means. My first dog - Tiger - was given away with the shop when my parents sold it. Yes it was a corner shop - let's not dwell on that for too long shall we ? We were assured the new owners were animal lovers, but I would have rather he came with us. My first cat Tibby was run over on the main road and my Mum told me when I got home from school. My parents aren't emotional about pets so they just don't get why I am so attached to Neo. I don't want to consider a life without him in it. I hope I don't have to for a while yet.