In my attempts to get fitter and healthier I've been avoiding fattening, processed, sugary foods and alcohol. It's not a bundle of laughs to be honest. I allow myself one dessert a week and have had one glass of wine per month so far. I'm glad I enjoy fruit and vegetables otherwise my diet would be woeful, however, even the most satisfying plate of green leaves is no match for the occasional treat.

I long ago gave up on cereal bars as an alternative to chocolate, they either have the texture of sawdust and the taste of saccharine or they are covered in chocolate or yoghurt to add flavour which also adds on calories. Either way they are a mimicry of food and an abomination. I'm not a fan. 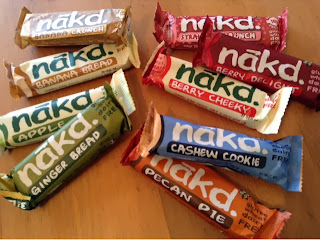 At the last yoga show I went to I found a stand selling Nakd wholefood bars. I had heard of Nakd, but hadn't tried them so I took them up on the kind offer of samples - having missed lunch. They were so good I bought one in every flavour and the lovely man behind the stall even gave me a few extra and some flavoured raisins to try too.

The bars contain only raw fruit and nuts and are gluten free, wheat free and contain no added fat or sugar. There are fruit flavours including berry delight, strawberry crunch and banana crunch. Then there are the cake flavours including banana bread, pecan pie and ginger bread. to give you an idea of nutritional content the apple pie flavour is 7% fat and contains under 100 calories. 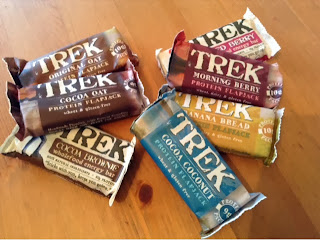 If you're after something more substantial they also do Trek protein bars which are larger and contain gluten free oats. They also contain wholefood ingredients and are very filling indeed. I keep one of these for days when I might be out of the house for a while and need a meal replacement as they contain around 250 calories and come in some lovely flavours including cocoa coconut - think healthy Bounty bar - and cocoa brownie as well as the fruit ones.

Now - in the words of the Vanessa Williams song - I've saved the best for last. The cocoa bars. I may have mentioned before that I love chocolate. I also gave it up in January and it didn't kill me. Partly thanks to the Nakd cocoa orange bar. There are no words to describe how incredible this bar is, it tastes like actual chocolate with a hint of orange and the mouth-feel is *whisper it* better than chocolate. These ones are still under 150 calories, but they are 20% fat so more of a treat than the fruit varieties. When Waitrose had these on offer recently I admit I went a little crazy and have stockpiled them. Suffice it to say that I'm not about to run out of cocoa orange bars any time soon. 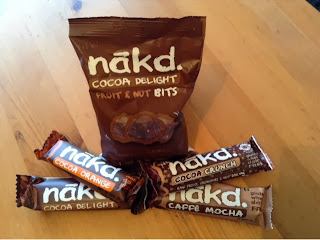 As if having a range that includes caffe mocha, cocoa mint and cocoa orange wasn't enough they have now introduced Nakd bits. They're little nibs instead of bars and you can add them to drinks or pop them like little sweets - this packet is still closed as they are so moreish I daren't risk opening it !

If you are trying to eat healthier, but have a sweet tooth these bars are worth a try. They come in a variety of flavours and are a great alternative to chocolate bars as they have no added sugar or fat and are suitable for vegans. Best of all, the nakd cocoa varieties actually taste like chocolate !!!

Disclosure: I was sent some Trek bars and Nakd bars and bits to write an honest review, however, most of the bars shown here were bought by me.