"Only Daddies can do that." Oh really son ?

On a visit to Grandma and Grandpa this weekend my boy was playing with an aeroplane that they bought him on holiday. He was showing Hubbie's Aunt Sue how to put all the seats and luggage and people inside the plane and they had seated the (male) pilot and the passengers when she asked what the (female) air stewardess was supposed to have in her hand. I joked that only the coffee pot would fit in her hand as being a woman she wouldn't be trusted with flying the plane. Sue said, "Well I don't agree with equality." I laughed. Later while Hubbie was putting our boy to bed and I was sitting with the old folks she mentioned how horrified she was at hearing about some parents who were "raising their child as a transvestite." When I asked what they were doing it amounted to, "letting him wear a tutu if he wants." Again, I laughed. It was when she started to make remarks about female Chinese students coming to the UK to study and why didn't they just stay at home that I cracked. "Well, better to come here and study than stay in a country where girls are still left to die for being female." I was starting to get a bit peeved.

I rarely agree with my father-in-law on matters of equality, or immigration or indeed anything contentious, but his sister makes him seem pretty moderate. I fear it may be rubbing off on my boy. The other day I was trying to open the garage door (with the wrong key as it turned out) and my son announced that, "Daddies can do it, not Mummies." I was horrified that he seemed to have such unreconstructed ideas of masculinity and femininity then I remembered that he's only ever seen Daddy open the garage door so he probably does think he's the only person who can do it. In the same way that he knows only Daddies pee standing up. Mostly, however, he sees equality. His experience of every day chores is that both Mummy and Daddy do the washing up, cooking, hang clothes out to dry and vacuum. We both drive the car, do the shopping (although Daddy goes to Sainsburys and Mummy prefers Waitrose) and either of us can dress him.
When he first went to playgroups he used to love playing in the home corner and early on we got him a gorgeous pink Disney kitchen to play with which my lovely cousin gave us as she was emigrating and couldn't take it with her even though her daughter loved it. Even now our boy has a pink buggy he pushes around the ground at football and his favourite toys include a vacuum cleaner and washing machine which my Mum gave him for Christmas. The way I see it when he is a grown man he will be able to live away from home and look after himself.

It was Hubbie who asked me to get the boy a buggy as he was always pushing his full size buggy around at football and it was a bit unwieldy. I phoned him from the shop and said, "they only have pink ones, you have to promise that he won't get picked on or teased at the football." Hubbie assured me he wouldn't and over a year later it doesn't appear to have been an issue for anyone. My boy always loved buggies and once when I took him to a church playgroup I popped him down by my feet as I asked for a tea and he immediately started to push a buggy. An older, bald man (who I mistook for someone's Grandad) was standing there and proceeded to tell me he would shudder if his boy played with buggies. I ignored him. He carried on giving me his (unasked for) opinions that culminated in the phrase, "I'd turn in my grave if that was my son, but I'm just quirky like that." I picked up my tea, looked at him holding his baby boy like a rugby ball and took a deep breath before replying, "No, actually I think you are sadly very traditional and not at all quirky." One of the other mums told me she knew his grown up children and he had left his wife, married a Russian teenager and was now playing, "Dad of the year" in his new family set-up. Not so much quirky then, as a pathetic cliche mate. 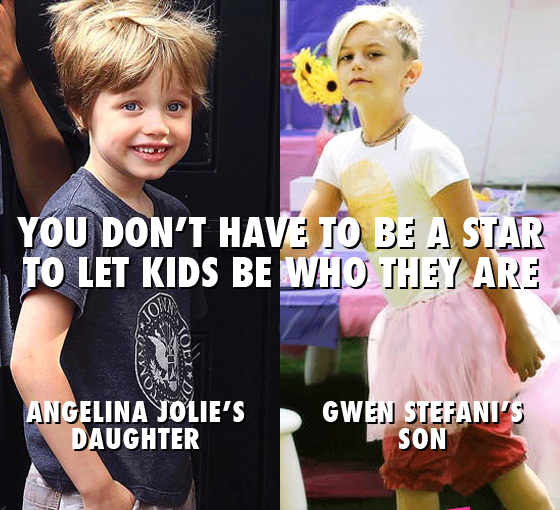 Today a friend shared this photo on Facebook. Shiloh Jolie-Pitt has short hair and is wearing combats and a Ramones t-shirt and Gwen Stefani's son is wearing a tutu over his trousers. Shiloh has 3 brothers - does anyone mention what they wear ? - and Daddy Brad has a penchant for combats and I'm pretty sure I've seen Mum Angelina wearing rock t shirts in her youth. A few years back when Maharishi combats were all the rage even hard bodied yoginis like Aniston and Madonna were rocking that look so why is it considered 'masculine' ? If Rossdale Jnr (ok I admit I don't know if it's Kingston or Zumba or whatever his name is) wants to wear a tutu so what ?

My son was invited to a superheros or princesses party recently and when someone asked what superhero he was going as I pointed out he might choose to go as a princess. You see it doesn't matter. He's a child. What he wears and plays with is all part of exploration and finding his identity. Sometimes it's just fun. My boy has a pink t-shirt with a dinosaur on it that he loves to wear. He doesn't have a tutu, but he does point his toes and say, "look Mummy I'm doing ballet." I'm not all liberal or loony for being ok with that.

Oh and he went to the party in a Spiderman jumper in the end. Over his favourite Stone Roses t-shirt.