The cat has started sleeping on our bed upstairs. He used to do that in the old house and before the boy was born, but in this house he has a few chosen spots to sleep and our bed hasn't been one of them. Until now. I wasn't sure why this was, but thought it might be that the room is warmer than downstairs, or he might just like sleeping where we've been. Then I spotted the him standing on his back legs with his front paws reaching up the chest of drawers at the top of the stairs. He was straining to look at something and then I realised what it was. The goldfish. 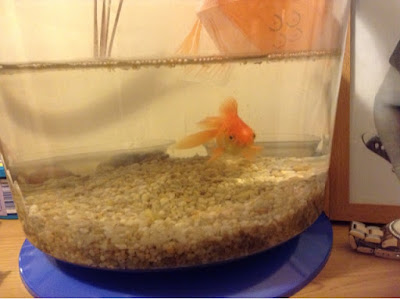 Vince the fish has lived with us for almost two weeks now and he seems to have settled in nicely. My son enjoys watching him swim and talks to him in 'fish talk' ie. making a face like a fish and going 'pop' a lot. He loved going out to get a fish tank for him and even picked up some cat food for the other family member so he is doing well in his ability to care for pets. I don't have a glowing record as a fish keeper - having overfed goldfish in the past - so when Hubbie said "there's too much food in there for him," I looked sheepish and felt guilty. I don't want to have the death of another fish on my conscience so I'm being much meaner with the fish flakes than I was before.

Overfeeding is a common theme for me so it's not surprising that this latest lesson coincides with my new year weight loss regime. I am resisting the urge to polish off all the leftover mince pies and had my first session of bootcamp last week so I'm feeling quite virtuous so far. The freezer is now bulging with yummy food that I've stored instead of 'getting rid' of it by eating it. I realise how uninteresting this must be to you so I promise not to bore you with the details of how it's going.

I may, however, make reference to how my resolutions are going. For example I've almost finished reading Danny Baker's autobiography and have already started on the Bloggess's book (which is great by the way). That's the reading resolution sorted. I've signed up to try a session of Kettlebells next week so that's trying a new exercise. Finally, I am delighted to report it looks like I have a movie buddie (thank you Sarah - you are indeed a Champion !), so I may have the going to the cinema one sorted too. Not bad going for the second week into January is it ?

Now if I can keep the cat from attacking the goldfish he might make it to February.