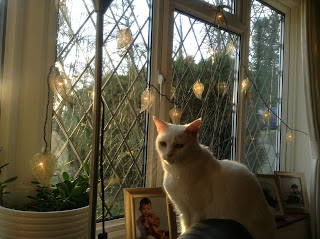 Well it has been in our house for a while now. This year I put the tree up - with unprecedented speed - on the first weekend in December. If you've been following my foodie posts you'll know I've been baking festive food for weeks now. The presents were all bought and wrapped in plenty of time and we didn't overcater on the food either. We made a decision about where to spend Christmas in plenty of time and now the boy has been deposited with my parents where he will wake up to a stack of presents and some very over-excited grown ups. It's been so long since they've had a little child at home for Christmas that I think he'll be a bit overwhelmed by it all, but he'll have fun. We'll pick him up in the morning and then deliver him to Hubbie's parents for lunch and yet more presents. It's a lot of travelling, but he gets to see all his grandparents on Christmas Day so no one feels left out and we don't get accused of favouritism. We have planned and organised (well I have), so why doesn't it feel at all like Christmas even though it's only a few hours away now ?

I have a few theories:

- Maybe it's the lack of lunacy in the shops this year. I managed to get all my purchases with hardly any queues and didn't feel enraged by crowds at all. That might be a sign that no one has any money, or it might be that we're waiting for the sales (which were actually in November). 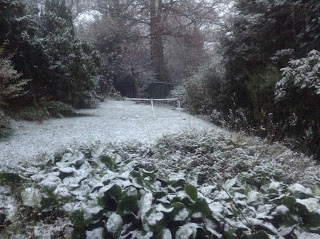 - It could be the fact that I'm not at work this year so I haven't been to any Christmas parties or lunches at all. Last year I went to one which was terrible and I wish I hadn't gone, but at least there was one grown up party. Without paper hats and inappropriate speeches it just doesn't feel like there is an end of year occasion coming up.

- What about the strange weather ? It sort of snowed about a fortnight ago and since then it's just been cold and sunny and today it's been raining and windy. That's just not Christmas weather is it ?

Of course it doesn't help that we haven't been to see Father Christmas this year. My son was supposed to meet him at his nursery, but on the day of the Christmas Party there was a power cut and they had to cancel. How prosaic a reason for not seeing Santa is that ? He took his gift gladly enough, but the magic is somewhat broken by not having the man in a red suit there in person isn't it ?

I'm sure there are plenty of people who are excited about Christmas - my son is one of them. Isn't Christmas supposed to be for children anyway ? When we go to pick up Hubbie in the evenings we pass a lot of homes with garish lights outside and I always point them out to my boy so now he gets all excited and shouts "Christmas lights !!" I'm not sure that I've imparted a lot of the tradition of Christmas to my son. My only excuse is that neither my family nor Hubbie's are Christians so essentially it's all about the food and the presents for us. I will admit that is not in the true spirit of things, but it is not uncommon either.

I'm always fascinated by the idea that this is the only time of year when some families eat together and that's why they argue so much. It's also supposed to be the time when warring couples call a truce 'for the children' only to separate in the New Year as though that is somehow better. Enforced jollity is pretty grim at any time of year and when we're all supposed to be eating rich food and watching the same programmes on TV it can be a bit trying.

That's not to say that I won't overeat or whoop with delight when I open my gifts or grit my teeth when my boy opens a noisy toy that he's been given by a well meaning family member (with the batteries already in - thanks a lot !).

And don't even get me started on New Year !