Day two in the house and Neo hasn't left the sofa... 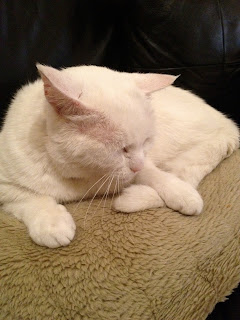 Ignoring a royal jubilee is easier than you'd think. I mean the swimming pool was practically deserted this morning which meant I had a lane all to myself and my son really enjoyed paddling around without lots of other children in the pool.

Now I'm no republican (I have an ironic royal wedding thimble and somewhere in my Mum's house we have a Charles and Diana mug), but I'm so not interested in bunting and union jack cupcakes it's just not funny.I do recall the silver jubilee in 1977 when I had a day off school and stood on the pavement outside my parents' shop as the Queen's car drove past and I was convinced she waved at me.

My parents knew a lovely Sri Lankan family who were staunch royalists and the pictures of royalty in their home were only outnumbered by photos of the Pope. This was all pre-Diana so there was a general sense of respect and deference to the royals rather than the fakery that 'they're just like us' that we are cajoled into now. I mean if Kate can wear the same dress as Tulisa (albeit Alexander McQueen) what more proof do we need that they're just normal people ?

I've been far more excited about the Apprentice finale tonight than the flotilla on the Thames. From the snippet of news that I just watched it looked pretty pointless, but my Mum enjoyed watching it and was very excited when she spotted a Sikh standing next to Her Madge. As a longstanding civil servant my Mum was invited to the Queen's garden party a few years ago and she was so proud and delighted. My Dad went with her and apparently mistook the Duke of Edinburgh for a shambling drunk as he ambled past (well you can see why he might can't you ?).

Their generation of immigrants from Commonwealth countries have an admiration of the royal family that seems to have ebbed away in subsequent generations. The tea towel count in homes of parents of friends who come from the Caribbean has always struck me as unnecessarily high. It's when they're framed that I think it's gone too far.

As I say I'm not committed enough to be an actual republican. My friend Nic abhors the royal family, but I treat them like I do the people who bullied me at school - I just ignore them. Of course if I use a stamp or money I come into contact with HRH, but otherwise she doesn't really impact on my life much.

It's nice having Hubbie home for 4 days though, so for that thanks HRH :o)