The Secret Life of Cats (part 2) 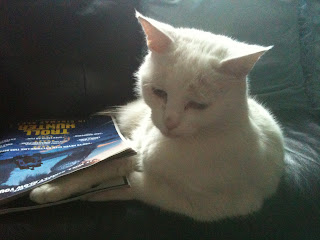 I was chatting to our neighbour this morning, it was the usual stuff "can you feed our tomatoes when we go away in August ?" and the like. This was the same chap who kindly fed Neo when we were away a couple of weeks ago. He is so honest that he told me he'd given our cat two tins at each meal - I always leave tins and a note out to assist in cat feeding. He had misunderstood and fed Neo double portions and not being one to look a gift meal in the mouth Neo had scoffed the lot ! Of course when we got home and it was back to normal rations he was less than impressed and Hubbie swears he has seen holiday brochures around the house as the cat tries to persuade us to go away again.

Today I found out that his preferred place to sunbathe when he's not at home is Phil and Jill's greenhouse. I suspect that he's looking to double in size either by sitting in the greenhouse or by eating double portions in order to take on Ginger from two doors down. The bush he likes to sit under when it's too hot or too rainy was the cause of a showdown the other day that I only witnessed the latter stages of. Ginger is a vicious animal and Neo tends to sit watching him snarl and spit - I don't know if this in practised nonchalance or the feline equivalent of a white flag.

Equally I can't work out what his relationship is with the fox cub who has started to wander into the garden. I like to think that Neo is defending his patch, but then I also wanted to believe that he didn't kill mice and was a Buddhist cat when we first got him. It was only when I saw a dead on the back doorstep that Hubbie had not managed to dispose of in time that I found out the horrific truth of my cat's homicidal tendencies.

I still don't know what he is peering at in the bushes over the road from the house or where he goes that he comes back from all covered in ash and looking like that Phantom of the Opera. Maybe when the boy goes to nursery I can devote a bit more time to being a cat PI ?

Email ThisBlogThis!Share to TwitterShare to FacebookShare to Pinterest
Labels: baby, cat, my boy