It's a maternity ward, not the red carpet

A woman had a baby this week, her third. It made the news because he is fifth in line to the throne of England and as with her first two she was outside the hospital showing her child to the world's press within hours of giving birth. In response (or possibly in support) women have been sharing photos of themselves immediately after they had a baby. The photos range from a woman applying make up and doing her hair to the scraped back pony tail and sweat top look.

My own first photo was taken by our midwife in the operating theatre after our son was taken out via the sunroof. It had all been so dramatic that I'm not sure I was even thinking about photos so I'm grateful that she had the foresight to do it for us. I was all trussed up in a gown and wearing a green cap when they brought him over to me. He was held close to my face so I could look at him, I closed my eyes to breathe him in and gave a prayer of thanks that he was safe. He was taken away while I was sewn up and there are photos of my puffy red-faced little boy and a wonderful photo of Daddy holding and looking at him with pure love and gratitude.

I don't recall looking in a mirror at all for the first few days - I had no reason to. I was in hospital and had limited range of movement due to the surgery. That didn't matter so much as I just wanted to stay in bed with him in my arms. At night I would lie with him on my chest just looking at his tiny little body and holding him close. The midwives would tell me to put him in the cot to get some sleep, but I didn't want to be without him for even a moment. We had come so close to not being there and he was far too precious to me to put him down. 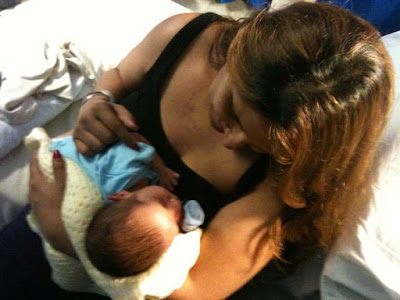 He was tiny when he was born - I had expected him to be bigger due to my enormous size at the end - which we now realise was due to the pre-eclampsia. When he came out so small I had to admit my size was probably down to the chips and chocolate I'd indulged in after years of dieting rather than baby and placenta.

As Brown Bear was the first grandchild and first nephew in our family the list of visitors who were desperate to see him was long. He was delivered by emergency caesarean so we weren't allowed to see anyone the first day. Then we invited immediate family and my two closest friends to come and see us. I think I asked Hubbie to help me shower and wash my hair before they arrived and wheeled the cot into the bathroom with me as I didn't want to leave the baby alone.

When they did arrive I was still in nightwear and stayed in bed pretty much the entire time they were there. My Dad was the first in and couldn't wait to hold the baby. He didn't want to leave. My friend S-J was so terrified of holding him - he really was so very tiny he looked like a doll - so I put a cushion on her lap to prop him on. I don't recall anyone commenting on my hair or lack of make up. If they did after they left I have no idea.

The very idea of showing off my baby to the world and being judged for how I looked would have been more than I could have coped with. In those first few hours I just wanted to be with my baby.