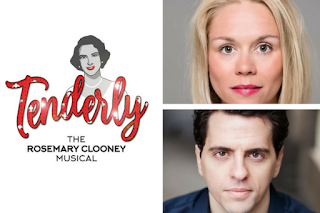 I've heard of Rosemary Clooney - who hasn't, she's George's auntie - but didn't know anything about her life until last week. The show Tenderly has finally come to the UK thanks to producer Joe Hodges working tirelessly for 2 years to bring it over. The show is intimate and features live musicians and cabaret style seating which adds to the atmosphere of the venue. There are only two actors - Katie Ray plays Rosemary and her voice is stunning. She plays the role with fragility and sassiness tinged with a deep seated need to be loved. Fed Zanni is breathtaking as the other 19 characters in the story and his ability to switch from playing Rosemary's mother to her psychiatrist is seemingly effortless. His singing is also extraordinary and the physicality required to make all the character changes would challenge anyone, but he takes it all in his stride.

The story travels from the inside of the treatment room in a facility where she has been committed to the stages on which she performed as a teen with her sister and later the big venues she shared with the likes of Bing Crosby and Frank Sinatra. We witness her trauma at being an eye witness to the assassination of Bobby Kennedy and the highs and lows of her life on the road performing. I had no idea how much heartache she suffered in her life and this show captures the sadness, the drug taking, the attempts by Sinatra to make her stop pill popping and the failed marriages and relationship dramas she experienced. I had always wondered how George Clooney and Miguel Ferrer could be cousins and this musical explained it to me. Tenderly features hit songs you will know and some original numbers that fit in beautifully with the production.

After the show I spoke to Janet Yates Vogt who is one of the writers of the show and she explained that the Clooney estate approved the story and have been very supportive of the production. I really hope this show gets picked up for a tour or a west end run as it deserves to be seen. The songs are beautiful and the acting is flawless. By the time we see Rosemary's eventual reinvention as a jazz performer it is a relief after she has been through so much. No, George wasn't there on the night we went, but I guess being a father to new twins and being a Hollywood movie star keeps him pretty busy. You might get lucky if you go on another night.

Tenderly: the Rosemary Clooney Musical is on until 23rd September at the New Wimbledon Theatre Studio. Do go and see it if you can. You won't regret it.

You can buy tickets here