When the weather gets warmer we spend a lot of time outdoors - sometimes that's in the garden, the park or even at the seaside. One of the reasons we love living where we do is that we are fortunate enough to have a big garden and plenty of green spaces around. I've been spending time cutting back the overgrown plants and Hubbie cut the grass this weekend to make plenty of room for the outdoor play toys that we've collected over the years.

Brown Bear loves all kinds of sports so we have plenty of kits including tennis, baseball, football and even a set of  french boules. Blue Bear is all about ride on toys so he has the tiny tikes police car and a tractor and pedal trike to play on. When we go to the park it's all about scooters, bikes and even skateboards. in recent months we've started getting the boys involved in helping in the garden - Brown Bear likes to cut back plants and Blue Bear enjoyed cutting the grass with Daddy the other day.

As you can imagine the potential for accidents is pretty high and there can be tumbles and falls even when we are being as safe as we can. Instead of making it a big deal and focusing on the injury I often distract Blue Bear with a song or a game to take his mind off whatever has happened. Brown Bear isn't so easily moved and will insist on a plaster for even the smallest of grazes. 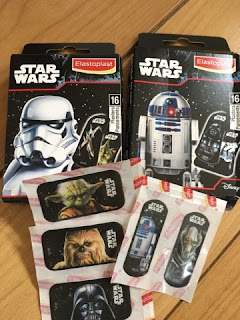 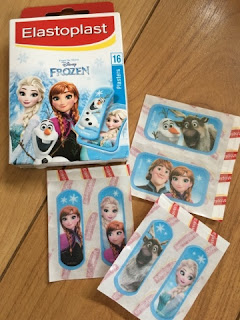 I remember when my sister was small she used to insist on a plaster to make imaginary injuries better and it was miraculous how she would perk up once it was applied. It is entirely possible that Brown Bear loves plasters because we buy special ones made for children. These Frozen and Star Wars themed plasters from Elastoplast will definitely be popular in our house ! One day Brown Bear took great pride in showing me he had three plasters (I'm not convinced he needed any of them !)

When I have a sad little bear to deal with I have a few tried and tested ways to bring a smile back to their faces.

1. A big hug. Often not straight away if there is a bit of drama going on, but definitely a hug.

2. I change the subject, "oh my goodness, did you see that squirrel ?"

3. Exaggerate the injury, "Oh no it looks really bad, do you want to go back indoors ? (and miss out on playing ? you must be kidding !)

4. Make up a song about what happened, this isn't always received well, but it does make me laugh

5. Offer a big plaster, "do you want a big square one or a big rectangular one ?"

6. Tackle the offending object that caused the tears. If it's a tree I tell it off, if it's a toy we talk about whether it deserves another chance.

7. Hubbie picks up the bears and carries them around until they laugh.

8. We invoke superhero powers - "what would Superman do ?"

9. I tell a terrible joke. I mean really bad to make them groan so much they have to laugh.


We love playing outdoors and tumbles and falls happen, but we don't let them spoil the fun for too long. A hug, a plaster and some ice cream can make such a big difference. If you need more ideas here is a magical movie about how to turn Tears into smiles

This post is an entry for the BritMums #TearsintoSmiles Challenge, sponsored by Elastoplast. http://campaigns.elastoplast.net/plastermoments/uk