Blue Bear woke up crying and upset this evening. He was shaking and incoherent so I talked to him softly and held him until he calmed down. As I tucked him back into bed I reassured him that Mummy and Daddy are here to protect him and take care of him. Brown Bear chimed in to say that if Blue Bear cries he will rush in to look after his brother too. This from a boy who wasn't feeling all that well himself either, but seeing his brother upset he stepped up. If that isn't love I don't know what is.

Love is being not saying. Even though Blue Bear now says, "Bye Daddy. Later. Wuv yoo." as he leaves for work (Hubbie, not my baby boy) and it's the cutest thing ever, it's not necessarily the gold standard of expressing love in this house.

Maybe it's because I'm raising boys, but I'm not exactly overwhelmed with declarations of love every day. Instead I value the slight and almost imperceptible acts of love.

A hug when I'm not expecting it - Blue Bear was sitting next to me on the sofa the other day and he leaned over and gave me a hug then sat back down on his side.

Random notes telling me nice things - after sitting with Brown Bear one morning and drinking a cup of tea while he ate breakfast (something I never get to do usually) he wrote me this note: 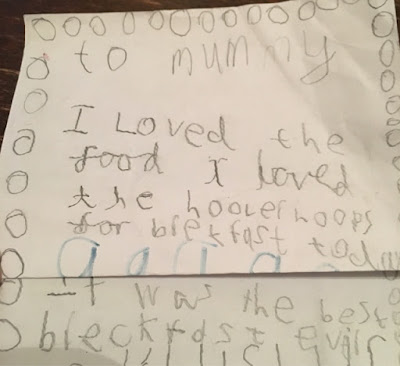 Being nice to the cat - both my boys respond to Neo's pleading for food with an immediate proffering of cat food or biscuits. Tonight Brown Bear whispered, "Mummy let me show you where Neo is hiding." He was under the rocking chair and Brown Bear was delighted to have the cat in his room.

There are days when it's just too tiring. The running around, the picking up boy socks, the smells. Oh my the smells. Some days it's hard to feel love never mind show it.

Then one of the boys will do something lovely and it's all ok. I think they get it from their Father.