Brown Bear has been staying with my parents since Friday. He goes for a mini break occasionally and he has a great time. My parents and sister spoil him with presents, visits and meals out. He gets to play with his baby cousin and generally has a bit of a 'holiday' from us. I miss him a lot when he is away. I call him every evening to wish him good night and in the morning to ask how he slept. He is older now so finds it all a bit silly having to talk to boring Mummy and gets distracted and wanders off mid conversation.

I take him over to my parents' house travelling on two trains. It's a little adventure we have and I take a train picnic for him and he asks to play on my ipad on the train. It's our thing. As I don't commute any more trains are often a bit of a treat for me now and going to Clapham Junction with him is great fun as every time we get to the concourse he says, "Mummy it smells like..." it's been various foods including pizza, chicken, potatoes, but never pasties - which is what it is. My journey home is always a bit sad as I'm hoping he has a lovely time and missing him already, while also planning to tidy his room and change his bedsheets while he's away.

The plan was to pick him up tomorrow. I have been preparing the train picnic for days now, collecting things to take with me. The Dangermouse comic with free spy glasses on the front, an apple that is so tiny it will make him smile, a flapjack from Waitrose that he liked last time I got it for him and a drink that he's only allowed to have sometimes as a treat. I also went out to get some flowers to say thank you to my sister for taking care of him so nicely.

Tonight we had a facetime chat and he seemed chirpy. He wanted to stay a bit longer so I said I'd pick him up in the afternoon tomorrow and would ask Daddy to come home to watch Blue Bear so I could come and get him on my own. It wasn't what we had planned and Hubbie huffed and puffed a bit then went off piste, sighed and said, "why don't I just go and get him instead ?" Before I could say, "let's have a chat about it." Brown Bear cheered, "Yay, yes I want Daddy to come and get me." Ouch.

So, Brown Bear will get the comic, the flapjack and the teeny tiny apple and my sister will get the flowers,  but I won't be there. I won't get to hear what he thinks it smells like on the concourse. I will see him when he gets home and he will already have told all his stories on the way home. He won't want to tell me when he gets home. Blue Bear will act up as soon his brother gets home in a combination of joy and annoyance that he is back. I will ask if he liked the comic and the snacks and he'll have wandered off already.

They grow up so fast don't they ? 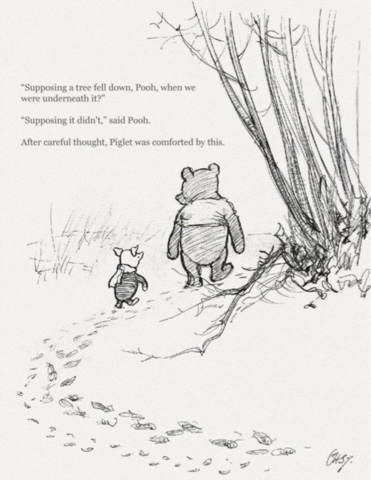