When I was a child living in South London all the kids in my school seemed to have roller skates, Pringle jumpers, Rubik's cube or whatever the latest craze was. When I asked my Mum why we couldn't have nice things like our school friends, she said it was because they lived on a council estate so their parents had no bills to pay, whereas her and my Dad had to pay a mortgage and bills for everything. We didn't shop at the supermarket - it was too expensive - we went to Deptford market for fresh fruit and veg and pulled along the 'granny trolley' that was embarrassing if someone from school saw you. We didn't think of ourselves as poor, but the way my Mum told it people on benefits were better off than us. As I grew up I realised that my Mum's perspective wasn't strictly accurate, but she was by no means alone in thinking like this.

Demonising the poor is not new. It's just that now we have TV programmes and newspapers telling us to hate people who don't have any money and the government is working a divide and rule policy too. It is so insidious that we don't even realise it most of the time. Even those who have been poor seem to do it. When Caitlin Moran talks about her childhood it is with affection and humour, but she does describe her family as 'your worst nightmare'. Her parents had no money, lived on benefits and didn't work, but had quite a lot of babies. She believes that growing up poor made her work hard as she was so worried about living on baked beans for the rest of her life and her girls not having enough tights to wear.

Joanna Rowling was a single parent raising her child on little money and she relied on the welfare state to help her keep afloat. Now she is a very successful and wealthy author and has been outspoken about how she is committed to paying tax in the UK to ensure the safety net is there for others. What she has voiced is a responsibility and a belief in not pulling the ladder back up behind her and leaving others to suffer while she sits on piles of money. Maybe the unsympathetic attitude of some of the wealthy comes down to not having to care because they will never be reliant on a system they find so abhorrent. Joanna knows what it is like to not have any money and instead of breathing a sigh of relief and buying more shoes she's decided that she has enough good fortune to be able to spare some for others who don't have any. Let's also remember that she didn't inherit her wealth, she earned it.

What is happening now is that we are being made to believe that we are all being cheated or swindled by the poor who are taking from the 'hardworking families.' The great lie is that anyone on benefits is a cheat and they are lying and scamming us all. The term 'working poor' doesn't refer to the person faking it to get benefits while working cash in hand. It's more likely the person who earns so little they have to rely on additional support to be able to feed their family and keep from ending up entirely dependent on the state. Of course there are exceptions who do take advantage, but pretending that is the norm is all part of the big lie.

Politicians often talk about people living in poverty as though it's somehow 'their own fault.' The idea that if only people could be bothered the wouldn't struggle with debt or hunger. One of my sister's friends was raised by her Mum on very little money. When her Dad left the family her Mum worked full time to support her two children, but didn't earn very much. She was too ashamed to keep asking her own Mum for help, so once or twice a week they would have to eat at the free kitchen in the local Sikh temple as she could not afford to buy food. Like so many families who are struggling she also went without rather than let her children go hungry. These are not made up stories, they are real people. 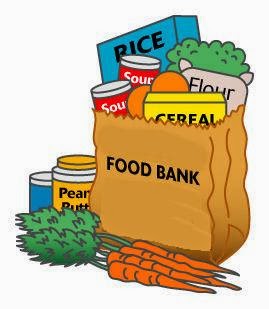 Jack Monroe has written honestly about her struggles with poverty and hunger in raising her son alone and when she took part in a TV debate recently she was treated appallingly by Edwina Currie who made remarks to her off air that basically came down to saying she'd done pretty well out of selling her 'so-called poverty'. When Jack was on Any Questions on Friday evening Kelvin Mackenzie tried to lecture her about food banks until she pointed out that she had actually used them to feed herself and her son. Why is it so hard to believe that a woman is telling the truth about living on almost nothing and having no money for food or heating ? That she is being honest about fearing she would lose her son if she told anyone ?

I hope to goodness none of those who make odious and unkind remarks about 'fake poverty' ever find themselves having to ask for help or assistance to support their family. Few people take pride in living off the state. For the majority of people it is not a choice they have made, it is something they are ashamed of and they would rather no one knew. The sooner we stop thinking in terms of the 'deserving' and 'undeserving poor' the better. This is not about the few who take what they are not entitled to, it is about the many who are trying so hard to manage on very little and who would rather not ask for anything.

I am heartily sick of hearing about the exceptions who make it ok to not care. I do care. I am sad that 30 years after my sister's friend had to there are still families having to eat in the free kitchen at Gurdwaras because they do not have food at home. I am, however, proud that the 'langar' is there to feed those who would otherwise go hungry. People aren't making themselves poor in order to eat there or faking it to use food banks - that's the snarky logic of those who have no belief in humanity. If you think someone would 'fake hardship' I feel very sorry for anyone you meet who needs a favour.

As I've been putting together a donation box for the local food bank and church collections I'm giving thanks that we have enough to eat and a home to live in.

It is something I don't ever want to take for granted.