My baby just cares for me...

I dropped my son off at nursery this morning and as I left I could hear him crying, but Petra told me he'd be fine and to leave, so I did. Then on the other side of the gate I paced up and down the pavement before getting into my car and bursting into tears. 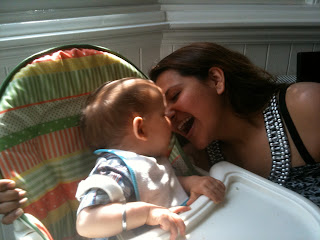 I've known this was coming and it is part of the process of helping him to learn how to be independent. I was hoping he'd skip into the nursery all smiles and with nothing more than a jolly wave over his shoulder he'd go and play with other children and not notice me at all. Instead he fools me into thinking that he's ok by showing interest in toys and as I say "see you later" he comes over to me and grabs my legs to take him with me. Then as the staff peel him off and take him over to play with something I hear his heaving sobs as I go to the door.

Of course it's only his second day and they assured me he was fine for the hour that I was away, but his tear stained and snot covered face when I returned told another story.

It was my choice to give up work and stay at home with my son and I don't for a moment think it was anything other than a good idea to be the adult he spends the most time with. I've taken him to playgroups, parks, libraries and sung songs with him for almost 2 years now. It's me who spends 11 hours a day with him so I choose which tantrums to respond to and when to just walk over him and pretend he's a small noisy rug.

It's also me who hears most words for the first time. I watched him take his first steps. I helped him feed himself for the first time. I showed him how to give the cat biscuits (just before he put his foot in the cat's water bowl). It is only right that I take him to nursery and do the official handover of responsibility for my beloved boy. It's also only right that we both find this difficult.

I reassure myself that he is of course fine when I am gone and that he is just trying to make me feel better by being suitably upset for my benefit alone. In psychology speak it's called a "secure attachment." If we didn't love each other so much it wouldn't be so upsetting to be apart.

That's what I'm going to tell myself tomorrow, and the day after that …