Let's hear it for the boy... who wears glasses 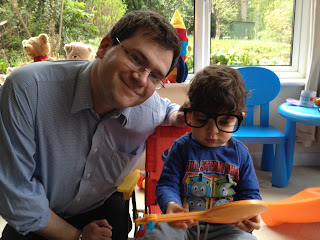 I've always been fascinated by the idea that a man becomes more distinguished with age while a woman just gets castigated for trying too hard to hold onto her youth. Similarly wearing glasses is not considered a passion killer for men, but the old phrase 'men don't make passes at girls who wear glasses' was so deeply ingrained in my psyche that I refused to be seen in public in my glasses for the first ten years of my glasses wearing life. Even now I am convinced that I'm treated differently when I wear them, although it's probably the rest of my 'can't be bothered to make an effort' outfit of jogging bottoms and ragged old uni sweatshirt that give offence rather than my eyewear.

For my own part I've always been partial to a bookish looking chap (Exhibit A: Hubbie) and think that it's quite sexy to look a bit nerdy. I prefer to know that a man can speak another language as it just isn't appealing to me to be able to bench press a London bus. Of course if the man in question is also stacked that's a bonus, but I'm guilty of assuming that if he's pretty or fit he's probably a bit thick. In my dating days I was set up with a chap who I was assured was just right for me. As were they all, but proved in reality the legend 'no plan can withstand contact with the enemy' to be true. This truism was etched onto the wall of my friend's downstairs loo for many years (and probably still is).

I digress, of course, but the point is that once I met this man he was as far from right for me as humanly possible. It started off ok with his impressive collection of vinyl and a lovely flat with skylight in the leafy environs of Southfields. He showed me his car - which he loved and which was made of plastic and was an Alpha Romeo and was red. That's all I recall of the car - sorry Top Gear fanatics. We were supposed to have lunch, but for some reason we ended up eating cheese on toast in his flat - oh don't worry it gets worse.  For a start he didn't appear to have any books. I asked if he read and he told me of course he did and pointed out the motoring magazines on the coffee table. Sharp intake of breath as I realised I was in the company of someone who owned no books, not a one. Now I may have mentioned this before, but I will say it again for emphasis. If you say to me that you don't read you may as well say that you kill small animals for fun or you eat children for a snack.

It's almost as bad as when I was set up with a man who "is just right for you - he likes films." Now there's my "likes films" which is the Blues Brothers, Some Like it Hot and Blade Runner and there was his which was pretty much Star Wars and that's it. The only saving grace was that we could blend in and avoid each other as we were at a fancy dress party where I went as Minnie Mouse (with ears I'd fashioned from a cereal packet) and he was some unidentified african leader. I shudder to imagine who exactly it was in those pre-freed Nelson Mandela days.

I guess my point is that you can't really decide who someone else is going to be attracted to based on what you know about them. Some people genuinely do like the opposite of themselves and some prefer a person who likes all the same things as them. I even know one couple who look so alike that they used to be mistaken for siblings rather than husband and wife - now that is just icky !!

Which brings me back to men who look a bit clever (whether or not they wear glasses) and as always to George Clooney who is both hunky and clever, John Cusack who is super clever and more than a little handsome and Alex O'Loughlin who… well he's just delicious so who cares if he's bright ?