For the love of my boys

Sunday morning is when I hope that I will get a lie in, but I never do. The boys are always up earlier than I would like and they are often giggling away in their room and asking Alexa to make fart noises. Well they are boys after all. They are completely adorable and affectionate and the source of petty frustrations, annoyances and pretty much all the joy in life. They bring me such happiness and wind me up in equal measure. This morning they climbed into my bed to finish watching the Lego Batman Movie while I drank my tea. I picked up a book that the play therapist gave me last week. One Marble a Day is a book about adoption and long term fostering which goes into the feelings of loss and sadness. We read it together - all three of us.

Blue Bear has been more open and willing to talk to me about adoption in the last year. I haven't pushed him and have let him lead. As a result he is eloquent and thoughtful when talking about family. I speak to the boys about feeling sad. That it is ok to feel that way and we are all here for each other. Some of it must have got through because they have been trying to match make for me. During the Christmas break we bumped into my son's football coach. Brown Bear said he thought I should go out with him. I pointed out that coach is much younger than me and the response was, "you look really young Mum, it's ok." Much as I was flattered I doubt very much that his coach would want to go out with me. Of course there is some self interest in my football loving son wanting me to go out with a sports coach who he likes, but it's also really sweet that the boys are thinking about me. They want me to be happy and they want to find me a boyfriend. 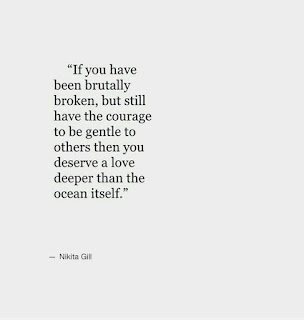 I don't consider myself to be anything special at all. I have tried to live my life from a place of kindness and to do as much as I can for others. This does mean I have been prone to being taken for granted, but it doesn't meant I stop caring about other people. It does also mean, I haven't shown great judgement in the past. The big relationships in my life have been with men who really didn't want to be me with me that much. The appeal of drugs, other women and the rugby was stronger than any desire to be with me.

I have a tendency to try really hard to keep a relationship going - I call it loyalty, but it might be more accurate to call it denial. Dogged determination is fine in a career, but not so much in a relationship where there is an uneven distribution of affection. Early in my life I was told I was selfish and should be more grateful. In adulthood this manifests as a desire to prove I'm not a bad person. I have stayed in relationships even when I was 'invisible' or bullied because I didn't think I deserved any better. I would deduce that it must be something about me that made them like that - even though the behaviour / habit existed before I knew them. The need to be 'good enough' kept me turning up for men who didn't consider being with me to be even in their top ten priorities.

In the beginning it's all lovebombing and romance. Of course that doesn't last forever, but I would hold out for it becoming something like affection. Over time it would become clear that I was an afterthought at best. As the man pulled away from me I would do more and more to prove I was worthy of the scraps of affection I was getting.  I would go to great lengths to ensure that their needs were being met, with little acknowledgement. Of course if I said anything I was ungrateful for not noticing the effort they were making for me. After all I shouldn't have expected anything at all.


I grew used to being 'fitted in' to the spaces between the things that mattered. He would see me late at night after he'd been out with friends - like a guilty secret. If I asked for better I was told I expected too much. We would arrange to do something together, I'd look forward to it and then he would cancel a day or two before - I was expendable. If I said as much he would accuse me of being ungrateful and unappreciative. After all he was making an effort. He was fitting me in when he could. Then the inevitable guilt gifts, money usually. I remember once explaining to someone that the reason his partner was upset with the gift of money was that she didn't want to go for a spendy weekend away with her sister, she wanted to do something with him. Giving money says, "I have better things to do than spend my time with you," or "I'm paying you to leave me alone."

So, back to the search for a boyfriend. Last week my boy asked me who Rob Lowe was. He saw a photo of him on my vision board and I explained that I am setting the bar quite high. A great body, nice to look at, nothing flabby or saggy please. Truthfully though I'll be happy with simplicity. If I do go into another relationship I'd like it to be with someone who loves and appreciates me. Who looks at me like I am the most beautiful woman who walks the earth. Someone who gets my passion for swimming and cinema and strawberries. Someone who will sit with me on the sofa and put their arm around me - who likes to watch movies. Someone I can share a fantastic Indian meal with that I got from my mate Sara. Who makes me tea the way I like it. That's not a lot to ask for really. Well maybe the tea as I am quite particular about that.