"Daddy do we have to move house ?"

I came back from swimming this afternoon in a terrible mood. Not just because Jim was in the water and when he swims it's like being in the Channel with waves and splashing and currents. As I got back I had an utterly pointless go at Hubbie about the washing airer - I said it was pointless didn't I ? Usually I find going for a swim calming and relaxing, but not today.

I haven't talked about this topic for a while. I've been a bit busy with life. Raising a family - adopting a young child, paying taxes, recycling, switching off running taps to save water, working with the community police team to keep residents safe from crime. Taking my elderly neighbour to the theatre for fun and to IKEA for garden chairs and tea lights (of course !) I've been giving blood and enjoying the tea and biscuits afterwards. I've donated to food banks, collected clothes for Syrian children, sent toiletries and essential items for migrants in Calais. I've been meeting my Fitbit target of 12,000 steps most days and taken up Clubbercise. I'm swimming and walking and practising yoga and gardening.

What I haven't been doing is worrying about what other people might hate about me, my kids, my parents, my siblings. I don't ask who gets the blood - or where they're from. When a remark is made in the community meeting that is sexist, or anti-anyone I challenge (forcefully, but politely). I don't let that shit go, but I also don't seek out the fight. Diplomacy doesn't come naturally to me, but I've had to learn it because it's just not the done thing to call a pensioner a homophobe in a public meeting. 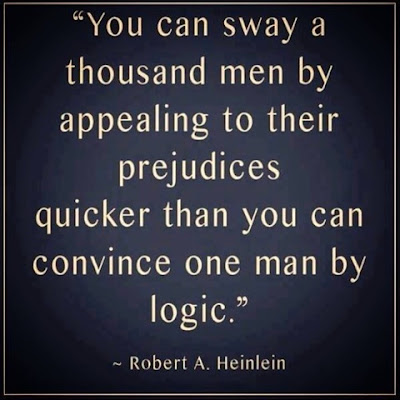 Then last week I took my boys with me to vote. I've always involved them in the process so they know what's involved, that it's not scary or complicated. Just like when I give blood I try to demystify and encourage by taking them with me. As we walked into the polling station an older couple were going in too. I quipped that I was getting the kids started early with democracy. The man looked at my sons and sneered then he said, "I don't need to ask." I'm still unsure if he meant that I would be voting remain or something else. It made me uncomfortable nonetheless. I've never contended with hostility when I've been with my boys and I'm increasingly concerned that it might happen now. That I will have to explain to my boys why some people are unkind about things over which we have no control.

Since last week there have been a lot of memes on social media depicting openly racist behaviour in the wake of the decision to leave the EU. I scrolled through many of these and just couldn't keep going. They included:


Some of this was happening even before the vote last week, yet it appears that it's not covert any more. I was at a conference yesterday and the doorman made remarks about the bin lorry driver, "not even speaking English," but it was ok as, "they'll all be leaving soon." I was sickened by his comments and shocked that he made them to me and smiled as if I would agree with him. 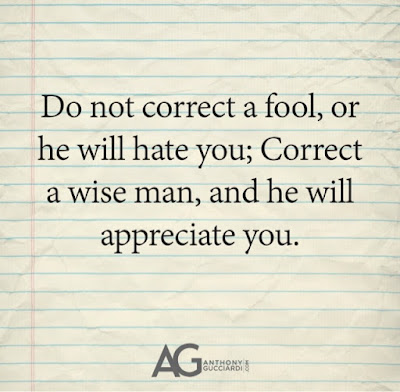 My dad worked on the London buses in the early seventies and he was racially abused on a daily basis for wearing a turban. He gave up the job in the end because it became too much. If you ever laughed when someone called out 'bud bud ding ding' you'll have no idea how it feels like a kick to my stomach me to hear that turn of phrase.


We lived in South London during the late seventies and it was perfectly acceptable for fellow pupils and even teachers to discriminate against Asian and black pupils. I wasn't a brave child and it was hurtful, but I accepted that it was part of life to be racially abused. Eventually I challenged a boy who called me a paki by calling him a paddy. (I'm not proud of this).
"I'm not Irish"
"And I'm not Pakistani"
"Whatever."
It was a retort I had carried around with me for weeks in the hope that I would find a way to use it. When I did it was suprising how facing him down took the wind out of his sails a bit. I'm pretty sure that wouldn't suffice any more.

A few years ago a woman racially abused fellow passengers on a tram and her actions were widely castigated. It was claimed she had mental health issues as if that was a sufficient explanation. I mean when I've skipped a dose of anti-depressants I find it difficult to stop myself from going out and picking a fight with Polish plumbers or shouting random homophobic abuse.

For the first time since I became a parent I fear what my children may be subjected to. My beautiful boys whose parents were both born in England, but one of whom happens to also be brown. If it's now acceptable to hurl abuse at anyone who doesn't 'look English' then we're all fair game aren't we ? I've *never* described myself as English. It's not something I would be proud of. I've seen someone justifying their Englishness by the fact that their family members served in World War 2. My grandfather was in the army and served for the British army. Does that make me English enough ? Well not if I don't look it apparently.

Right now I find it shameful to be associated with this behaviour. I hope that things calm down and I don't have to explain to my 5 year old and 2 year old why some people are being so hateful and unkind. I did tell Brown Bear on Friday morning about the decision to leave the EU - of course he didn't fully understand. This afternoon he told Hubbie he felt sad that we might have to move house because of the vote. We were both baffled as this isn't something we have discussed at all.

What I will do is share the kind and welcoming things that people are doing and reassure him that plenty of people are wonderful. Like whoever made this lovely gesture in Bristol.* I hope that there are plenty more of the positive stories to tell in the days to come. 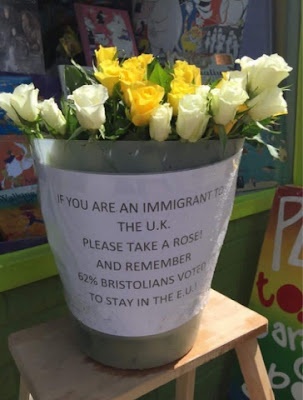 *If this is your sign I would love to give you proper credit. Please contact me if you know where this was displayed.