We were out for a meal at the weekend to celebrate my birthday and after a little while an older couple were seated at the table next to ours. From the conversation it appeared they were on a first date. He had been a pilot, had been married, lost a lot to his ex-wife in the divorce, likes romantic novels and is a fan of Scandi dramas. She is from New Zealand. As you can tell he monopolised the conversation and she listened attentively (as did I evidently). We left before they did, but it appeared to be going well. I can't imagine how difficult it is dating when you've already had a life, a family and a history before you meet. 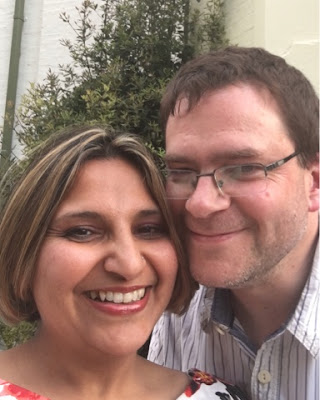 Hubbie and I met in our 30s so we had already had serious relationships. In the early days of dating we went out to eat and drink a lot and didn't put pressure on ourselves to expect a big future. It felt natural to spend time together and we didn't struggle to be in each other's company, so we just decided to see how it went.

When you're first dating it's the time you find out the things you need to know whether or not it's going to last. Not the, 'what I do for a living' or 'where I grew up' stuff. This is more the, 'will wait patiently while I try on multiple versions of the same shoes before deciding not to buy any' or 'is polite in the face of being shoved' and - most importantly - 'will say something when pushed in front of in a queue.'

These are things that can be discovered on the first date, but often we're being our best, fake selves so maybe it's not an accurate assessment. For example I didn't know for a long time that we have opposite attitudes to instructions. I see them as a hindrance and he sees them as essential. Hubbie buys guidebooks for holidays and I just wander around idly looking for inspiration to strike - often getting lost in the process. I see something in a magazine and decide I have to buy it, he will do a comprehensive check using consumer reports and reviews before making a purchase. I have also recently realised that far from being the strict disciplinarian parent that I thought I was I'm a pushover and he's the one who operates a zero tolerance approach. I will make idle threats like, "ok, that's the last time you ever eat chocolate ever again." and he'll say, "No chocolate after 6pm."

It's possible that meeting someone and knowing their best and worst features is the way to form lifelong relationships. However, random factors might be more important in ensuring longevity.  Like when we popped into The Pier as they had a closing down sale and I spotted a table I just had to have. "It's only £10 can I buy it ?" I pleaded. "How will we get it home ?" he said. "On the bus ?" I may have fluttered eyelashes or heaved my bosom to persuade him. So we carried it Laurel and Hardy style through Croydon and put it down at the stop to sit on while we waited for the bus.

You see it's not the big stuff that keeps us together, it's the daft and everday. The times he's made a terrible joke and I've found it funny. His impersonations of politicians and people we know that make me weep with laughter. How he makes excuses for my doing something stupid or just takes the mickey out of me. That he calls me Mutley when I laugh and Cloth-ears when I mishear something. I don't think I would have found out any of those things on a first date.

The most important thing I know that will keep us together - however - is that he makes a fine cup of tea. Like I said, it's the basics. 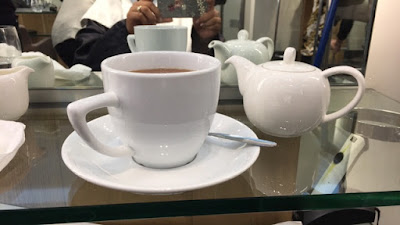