An egg hunt, some tree climbing and an offer we can't refuse :)

Over the Easter weekend we had hoped for warm weather - but not too warm - so that we could do our annual Easter Egg Hunt in the garden. With two boys taking part this year I bought new collecting buckets in fetching yellow and we made an early start to ensure there was plenty of time to eat the finds and to prevent any animal pilferage. As it was a little damp underfoot they put on outdoor shoes and matching hoodies to seek out the tiny chocolate bunnies, the beanie filled eggs and finally the big eggs they all got - yes even Daddy. 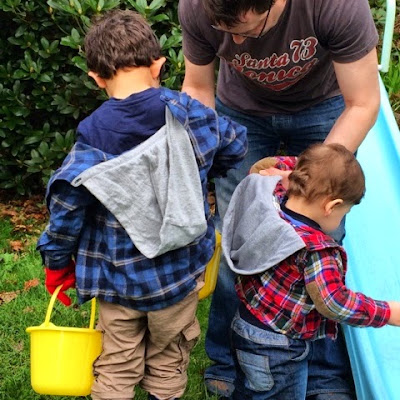 In the afternoon the weather was so nice that we decided to take a trip to a local park so with one boy on his scooter and another in the buggy we trotted off down the hill and saw that a lot of other families with children were doing the same - probably also trying to wear off the effects of chocolate overload I imagine ! You may recall my big boy has a thing about climbing trees at the moment so he was delighted when we spotted this massive tree with enormous exposed roots and lovely, crunchy pods underfoot. 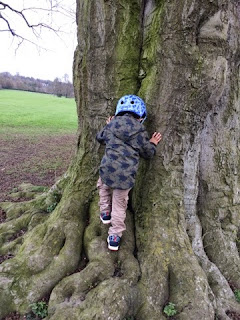 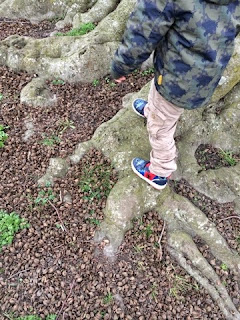 The next morning was a lot sunnier so Hubbie kindly took the boys outside to kick around a football so I had the house to myself for a little while. I did nothing more exciting than a bit of washing up and sorting out, but it was much easier - and faster - without the small persons around. 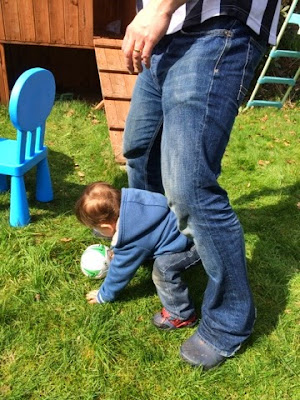 While the boys were outside I heard a jangling sound and I was puzzled what it was. I did wonder if it was a rag and bone call or something similar so I went out the front of the house to look and imagine my surprise when I saw a fire engine a few doors down from us ! My boys love fire engines and I called them to come and see the real life one that was in their road. I have never seen my big boy move as fast as this when I've asked him to do something. 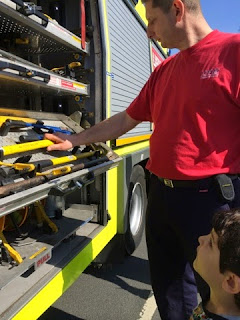 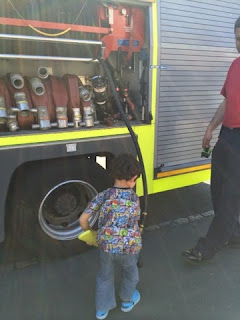 The kind chaps on the engine were checking fire hydrants in our road and they were more than happy to show my boys all the equipment on the fire truck. As a devotee of Fireman Sam my boy asked to see all the axes, tried out a hose and even checked out the ladders. We were invited to pop over to the fire station any time to see more engines so with a few more days of school hols I think we might just take them up on that :)