Neo the cat: a day in the life

I occupy the house with the cat more than with anyone else. Since he came to live with us we've spent the most time together. In the early days when he was being kept in I used to come home from work first so we would have some one to one time then I'd give him his dinner. When I was pregnant he used to sit on my tummy - until the baby started to kick him that is !

As time progressed he got used to the shift in power from him being the first to get fed to the small human being first and then him. He now knows that as soon as the boy has his dinner he will get his, so he sits at his bowl moaning about the starvation he's convinced he's suffering.

Neo came to live with us when he was about 6 and a half years old - Battersea weren't entirely sure - so he's pushing 13 years old now. He's settling into a comfy middle age that is belied by his scampering down the path when he spies me at the kitchen window. He insists on miaowing by the cat flap until someone opens the door - or my son holds the flap open for him. Not for nothing do we call him a primadonna.

He used to follow me around like a doting suitor and he'd miaow at me when he wanted food. Now he only talks to me when he wants to eat - he is basically a teenager. Now my boy is at school during the day so me and the cat have the house to ourselves during the day and a typical day goes something like this:


5.25: Hubbie wakes up to get ready for work - he feeds the cat. He comes up to lie on the bed with me (Neo, not Hubbie)
6am: as Hubbie pops in to say "bye" the boy wakes up and wanders in to join us. 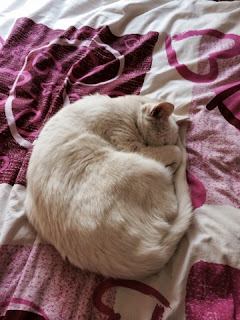 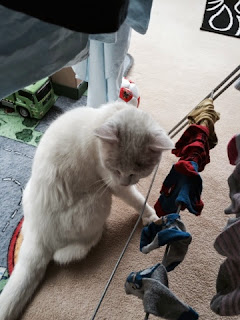 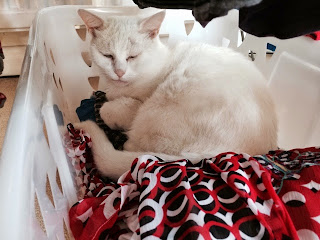 1.30: Lunchtime. He gets up, stretches and goes to the kitchen to miaow for biscuits

2.00: While I listen to the Archers repeat Neo pops out to sunbathe 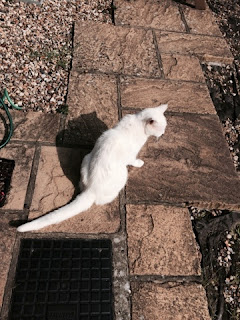 3.30: We get home from school and he is sitting there waiting to greet the boy 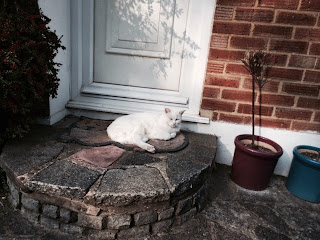 8pm: When we finally some time to ourselves he watches a bit of telly with me. You know, the usual, Bake Off, Come Dine - what can I tell you, he's a foodie. 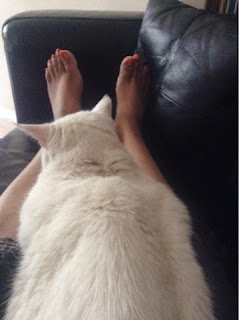 Unless he can sneak into story-time that is. If he can crash a story at bedtime that's where you'll find him, pretending not to listen. All casual like. 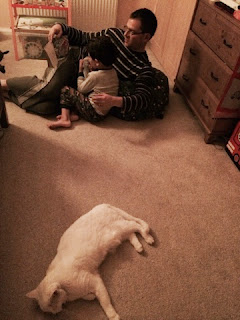 So that's a day in the life of my cat. Not a bad life really is it ?

Email ThisBlogThis!Share to TwitterShare to FacebookShare to Pinterest
Labels: Battersea cats and dogs home, cat, come dine with me, Great British Bake Off, my boy, Neo