We could be heroes… just for one day.

In a previous blog post I mentioned that I was disappointed to not have the chance to go to more events at the Olympics having been to just the beach volleyball and given my tickets away for the hockey. It was purely because Hubbie said I'd love the Olympic Park and it would be worth going to see it. So imagine my joy when he told me he had tickets for us to go to the Paralympics.

A friend of mine was at the Olympic Stadium last night as Jessica, then Greg, then Mo won gold medals and caused uproar all over the country as households watching on TV shouted, leapt up and down and felt patriotic all at once. I can well believe that it was an electric atmosphere and that there will be nothing like it again.

However, I'm not being bitter when I say that I'd rather watch the athletics at the Paralympics - I genuinely would prefer it. Of course it is a stunning achievement to make it to the Olympics and then to break records and win a gold medal all at once. It's also very gratifying to see that Team GB is represented by so many different people from backgrounds that are not traditionally 'British.' All the more enjoyable as only yesterday morning the BNP leafleted our house and I'd love to ask them how they feel about Britain being represented by people they would have 'sent back' or as the Daily Mail would have it 'plastic Brits'.

I'd prefer to watch the paralympics because there is an element of the athletes being superheroes. I don't mean this in a condescending way. After all the possibility of disabled athletes competing alongside their non-disabled peers is closer now thanks to Oscar Pistorius or the 'bladerunner' who will be the first person to compete in both the Olympics and the Paralympics. Equally South Korea's Im Dong-hyun who is completely blind competed in the archery at the Olympics. 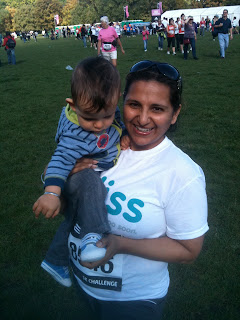 What I do hope in taking my son to the Paralympics is that he understands that disability is just another facet of life. That he will grow up to know that someone who is different in one way can still do amazing things and achieve great awards. I also want him to not feel embarrassed about disability in the way that so many people still are. Once I asked a colleague if he had been injured skiing as I hadn't noticed he walked with a stick before. He told me he had polio as a child, no big deal and we moved on. Another colleague was embarrassed on my behalf, which I just don't understand. Why is it not ok to ask a disabled person a question ? Surely better to ask and know the answer unless the person being asked is not ok about it.

A paralympian is as exceptional compared with any disabled person as Jessica Ennis is compared with me. Of course the latter is an unfair comparison as even if she weren't a lot younger and fitter than me Jessica still has the ability to be good at more than one sport while I struggle to just learn the rules.

So from a total sport-phobic I'm now an (albeit temporary) fanatic. It won't last so rest assured that I'll be back to talking about cakes and chocolate again before too long.