As I was half listening to Radio 4 yesterday I heard that a report had found that mothers who work are less likely to become depressed than women who stay at home with their children. One of the women commenting on this report stated that she would be bored senseless if she stayed at home with nothing to do but look after children and going to work gave her purpose and meaning in life.

Having been at home for over a year looking after my boy I noticed that recently I had become resentful of not having any time to myself in a day and waited with impatience for Hubbie to get home so that I could go and do something other than be with my beloved offspring. I was a seething mass of unexplained anger and found that being by myself with my son was appealing for only so many hours of the day. I don't know many people in the area where we live and the ones I do have mostly returned to work or are pregnant again so I don't even see them much. The weekly routine of playgroups and activities gets us both out of the house and I make sure that we do something constructive every day even if it's just a walk to the park. Coupled with an insane paranoia about leaving the house because of a spate of burglaries in our local area I've become a bit reluctant to go too far or out for too long. This is no way to live I was aware that if I didn't pull myself together I was going to become agoraphobic.

I finally opened up about this to a few friends and they concluded that I needed to go back to work as I was bored and underachieving at home. So in the last month I have returned to working a few days a week at a job that is not far from home. I was absolutely miserable for the first few weeks. I missed my son terribly and couldn't bear being in an office on my own for a whole day with only the scale filled kettle in the finance office to lure me out for the occasional cup of tea. It was, however, lovely to come home to hear all about what my boy had been doing and to see his smiling face and acknowledge that he hadn't been irreparably harmed by me not being there to tend to his every whim.

I'm still not entirely sure that this is the dream job for me, but I do know that when my son waves me off in the morning he's in good hands all day. I enjoy going for a walk at lunchtime and I like using my brain for something other than planning meals for my family and deciding if the bookcase should stay where it is or be moved a few feet to the left. Ok so I don't get to bake as much - which is completely overrated as a pastime by the way - and I'm sure the cat will lose some weight without me giving in to his plaintive cries for biscuits every time I go anywhere near the kitchen.

My Mum worked full time most of my life and didn't have a choice about it. She still cooked a meal for us every evening and managed the household budget as well as ensuring we were all doing well at school. In my mind that is the gold standard of what I should be aiming for and anything less is just me being lazy or not trying hard enough.

Trying to be a yummy mummy is pretty demoralising stuff. From comparing how much slimmer every other mum appears to be, to feeling guilty for sitting on the sofa watching mindless telly while the baby naps it all adds up to not being the woman who "has it all." Which brings us back to where I came in and the Radio 4 piece about the myth of women wanting it all when actually we just want to not be bored or depressed or taken for granted. Being pregnant again would be a pretty sweet bonus too if anyone is asking :o) 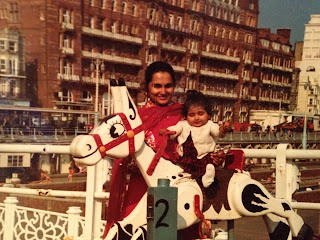